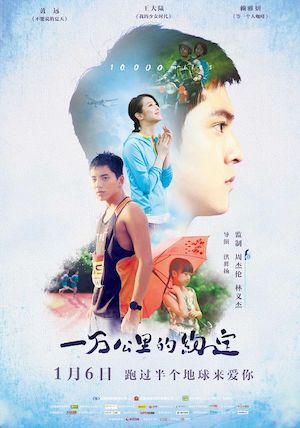 Every Sunday we watch a different Asian movie and this past weekend it was Taiwanese film 10,000 Miles.

Kevin is from a rough neighbourhood in Taiwan and his dream is to become a champion runner. He is connected to a coach named Ellie, a former runner, who he falls in love with. He competes in the Silk Road Marathon to win her heart however she is hiding the truth about her health.

Darren Wang (Wang Da Lu | 王大陸) plays Kevin. Darren is a very much in demand Taiwanese actor who is most famous for his role in the 2015 film Our Times, playing the character Xu Tai Yu. [IMDB]

Megan Lai (Lai Ya Yan | 賴雅妍) plays Ellie. We are more familiar with Megan’s work through the iconic TV Shows Two Fathers and Bromance, one of the reasons we wanted to see this movie. Megan is a Taiwanese actress, singer and model. [IMDB]

Chun Liao (Liao Zi Yuan | 廖峻). I’m not sure of the name of the role he plays, but the owner of a store. He has a long career going back as far as 1979 and has played many roles over the years, he is more familiar to us in the Taiwanese TV Show Two Fathers, he played the stage Dad to Megan Lai. [IMDB]

First off it was so good to seem some familiar faces in this film, playing other characters than we have seen before on the TV screen.

The story was promising, two brothers stuck in the slums trying to make something of themselves. There were some great scenes, even some CGI, but there were also some not so good scenes. The plot was a little confusing at times, maybe parts of it went by too fast to catch what was going on in the storyline.  Maybe the direction could have improved. The action scenes seemed a little far fetched as well as the evil doctor otherwise it could have been a little bit more realistic.

Most of the actors gave a really good performance especially Darren Wang and Megan Lai.

The cinematrography was really good especially the outdoor scenes, some of them did look like a tourist brochure wich was good.

Despite the highs and lows it was a good movie to watch with a mixed ending of happy and sad.