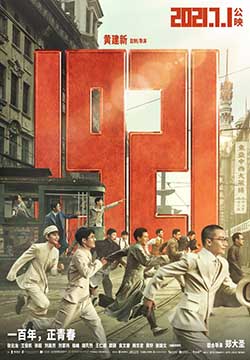 With a little trepidation, I saw the Chinese movie 1921 which outlines the early days of the Chinese Communist Party.

The movie was created to celebrate the 100th anniversary of the Chinese Communist Party, it premiered on 1 July 2021, and as far as I can tell has pocketed US$76.4m at the box office. Filming started on 1 July 2020 until 5 November the same year. Two actors were removed from the cast for related scandals.

It chronicles the events just prior to the creation of the CCP and the events that followed in particular the revolutionary leaders that bought this about.

There was a lot of actors in this movie, Chinese and some western too. Most of the western actors were in extra’s type roles with the exception of two.

Following are the Chinese actors I recognized:

Wang Ren Jun (王仁君) playing Mao Ze Dong
We have just started watching the TV Show “The Story of Ming Lan” and he is in that.

Turbo Liu (刘昊然) playing Liu Ren Jing
We’ve seen him in the films Detective Chinatown and My People, My Country, and TV Series Nirvana in Fire second season. A very popular actor with multiple films in the works.

Tian Yu (田雨) playing Cheng Zi Qing
We’ve seen this actor in the film The Legend of the Demon Cat and the TV series Joy of Life.

Zhang Ruo Yun (张若昀) playing Liu Shao Qi
He was also in the Joy of Life TV series, the actor that was kind of annoying by the end of that series.

Johnny Bai (白宇) playing Cai He Sen
We just saw him in the Guardian TV Series.

Zhu Yi Long (朱一龙) playing Zhou En Lai
We also saw him in the Guardian TV Series. He is a lead character in the TV Series The Story of Ming Lan that we have just started watching.

Ni Da Hong (倪大宏) playing Huang Jin Rong
We saw him the Netflix sponsored show The Rise of the Phoenixes. He appears to be in many TV shows, several each year.

Suffice to say, they stuffed as many well-known actors as they could in this film.

The cast was extremely impressive with a lot of well-known actors and actresses. Maybe the actors wanted to be in the film because it might be watched time and time again as a historical piece. Maybe the production company wanted to stuff in as many well-known people as possible to ensure its success and investment. So, during the movie, I spent most of my time “spotting the celebrity”.

The cinematography was alright, nothing special. There were a lot of overseas references but certainly, that was not Paris where they filmed, I am sure I’ve seen that set in other Chinese productions this time with a CGI Eiffel Tower. The car chase was the best scene, live-action wasn’t the main focus of the film though. The scenes of crowded people were good. Not sure whether they restored old footage or created new ones for some momentary “at war” clips. For the short interval they appeared on screen I am thinking they were just restored.

The storyline was boring and quite cringe-worthy. There were many political references I had seen in other movies, that was nothing new. They introduced a huge number of people and had no idea who they were or what they did back in that era. They had their names on screen so I could look them up but I will most likely not have the time, but good for those who want to use it as a springboard to learn more about that part of Chinese history. Towards the end there was a lengthy focus on Mao and a little girl, it was very cheesy, like elements of a propaganda film, or worshipping a God, which made me screech in mutant agony inside my brain.

So I see many are rating this online at around 7.5 out of 10. I will rate it as 5, and I am being generous. I am being generous as the film was shot during the peak of the COVID pandemic and it must have been difficult to produce at that time. I don’t regret seeing it but I wouldn’t want to sit through it again.