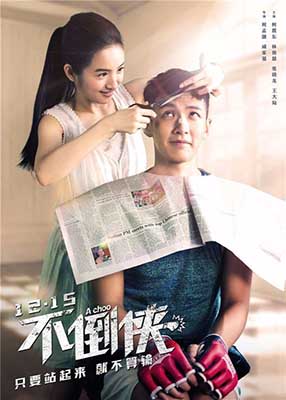 I came across this movie from a review by someone else and although it was not highly rated thought it was interesting enough to check out.

Growing up in an orphanage Wang Yi Zhi and Ye Jian Han both fall in love with Hsin Hsin. She happens to mention that she would fall for a strong man and in order to win her heart one of the guys becomes a boxer and the other a policeman. The story centers around Wang Yi Zhi who is trained by ex-superhero Flash.

Hsin Hsin falls in love with cowardly superhero Sonic, and when she is kidnapped it’s up to Wang Yi Zhi and Ye Jian Han to save the day, and win her heart, by defeating the evil Cube.

The cast in this movie is very impressive.

Chen Tung Ko plays Wang Yi Zhi
One of the few actors I had never heard of and placed in a lead role, his performance was good. He has a mix of leading and support roles in other movies but no TV series, as far as I can tell.

Ariel Lin plays Hsin Hsin
I always thought Ariel was a singer but hadn’t realized how many Movies and TV Shows she’s been in.

Louis Koo plays Flash
I was stunned to see Louis Koo in this production, mind you he is starring in so many movies these days it’s difficult to miss one. To think last week, we only saw him in All’s Well End’s Well. His part was serious with a bit of comedy thrown in. He has six different films in production, not sure where he gets the energy from.  It was great to see him in this production.

During the movie I wasn’t quite sure what to make of it. I was thinking it’s just a film about two guys trying to win the heart of a female but never expected it to be about superheroes. So, the two main superheroes involved; Flash ended up a recluse and Sonic was a coward. It was up to someone with no powers, as much as he wanted them, to save the day.

The production quality was surprisingly good, especially the CGI. With Netflix’s investment in the movie the production team were able to afford outsourcing it to a quality effects company, I don’t know really.

If there is one thing to remember about the movie it would be “if you get knocked down, keep getting up” or maybe “you don’t have to be a superhero to achieve remarkable things”.

I’ve heard that many people enjoy the work of Giddens Ko who was the screenwriter on this movie.  He is a well-known Taiwanese novelist, film director, screenwriter, and film producer. I heard that in 2014 the CCP ordered all his works in China be removed from bookshelves for supporting an organization that was involved in the Hong Kong protests. However, many of the cast in A Choo were Chinese, so not sure if China still dislikes him.