Age of The Legend Review 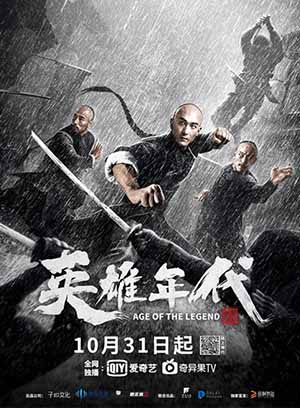 Age of The Legend (英雄年代之九龙密钥) is a Chinese movie that was released by iQiyi this year, 2021.

At the end of the Qing Dynasty, a group of heroes get together to prevent the British and Japanese invasion of Guangzhou City. They are presented with numerous obstacles on the way that challenges them to reach their goal.

I suspect this might have been a “made for TV” movie rather than one that was released through the cinema. I can’t really know for sure.

Never heard or seen any of them before, but from what I could see the main character is of Taiwanese origin.

Adan (aka Gu Han Yun or 阿丹), from Taiwan, played the main character, not sure what the name of that character is. Age of The Legend looks like his first film role, he got his first break as a support role on Spicy Teacher back in 2000.

If nothing else this movie is good for a laugh but would take it with a pinch of salt.

The first thing I noticed was the accent of the British, they sounded spookily familiar to Russians. Many Russians play Caucasians in Chinese movies. Their accents and acting were slightly painful to watch.

The script was daft but oddly well presented. The CGI wasn’t great, such as the British ships and guns in the mountains.

The monk character was acted really well and was hilarious. There was an effeminate guy and of course, the script included how awful that person was, although was a hero of sorts as well. The main Japanese female character really did act evil, she was a good actress, although had to meet her demise eventually.

The fight sequences/choreography were really well-done with quite impressive camera work.

Overall, not a bad film for entertainment value, quite a few amusing moments I will never forget. I give it 7/10 and recommend everyone seeing it.