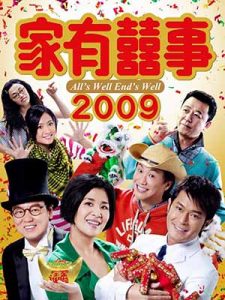 The Hong Kong movie All’s Well End’s Well was a great find and we really enjoyed it, this is my review.

There is a series of films called All’s Well End’s Well, these are the ones I know about:

They remind of the “Carry On” movies in the UK.

The 2009 movie focuses on the crafty Casanova relationship advisor Dick Cho and a stern magazine editor/writer Yu Chu who is determined to spend her life single. Cho is hired by Chu’s brother to try and find her a relationship which leads to many hilarious situations.

The actors in this production were just incredible, from the out takes at the end it appears they were all having such a good time working on this production, it show’s in their performance.

Louis Koo as Dick Cho
We’ve seen this actor in many productions, mainly films, both recent and in the past. His best performance has to be in this film. I’ve been wanting to watch the 2001 TV show “A Step Into The Past” that he starred in, but haven’t had the time, I understand he is reprising this role in a film called “Back To The Past” release date to be announced. He has 6 films he has committed himself to acting in, wow, he must be extremely popular.

Sandra Ng as Yu Chu
We haven’t seen this actress in many productions but recently saw “Enter The Fat Dragon” which was great. Her performance in “All’s Well End’s Well” was just brilliant, so funny. I understand she also appeared in the 2010 and 2012 films. Sandra has directed 1 film called Goldbuster and produced 3 films must recently “Zero to Hero”. I can’t wait to see her other work.

As you might have guessed by now, I really enjoyed this movie, it’s as if it was made for me. It was a typical old school comedy romp that only Hong Kong can produce. It did remind me of a British “Carry On” movie but not so rude.

I can’t think of anything bad to say about this movie. Exceptional story line, character development, most of the main cast had a big part to play, it was well executed, and timing is everything in a comedy. All the actors did a fantastic job.

As soon as I finished the movie I tried to find where I could watch the others, I did manage to find a place that sold the DVD’s so I will probably buy them at some point.

The 2009 movie can be found on Netflix. I really recommend it to everyone.