“An Inspector Calls” [浮華宴] is a Hong Kong comedy movie that was released on 19th February 2015. 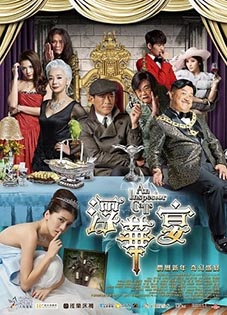 The official summary of the movie is “Hours before a family’s party being thrown for daughter’s engagement an inspector shows up at the house. He is investigating the cause of a woman’s suicide.”

It is based, very loosely based, on a play written by J. B. Priestley which premiered on 6th July 1945 in Moscow.

These are the cast members I recognized from other TV shows and films.

Louis Koo [古天樂] Once well known for the TV performances he currently has a ton of films coming up that are in the works. We’ve seen him in films, some have been good, some have been quite bad.

Out of the main cast, that is all I remember, but there were some famous guest performances.

Donnie Yen played all the characters in a band. That part of the movie was totally hilarious, it was just worth watching it for that scene.

Raymond Wong also played a support role but I have no idea which part. I will have to go back and try to find him.

Well, all I can say is the film was total madness. It felt as though the actors just turned up at work one day and they just did anything they want.

It wasn’t like some of the older Hong Kong comedy films, it didn’t grab the essence of those films way back when..! There were some amusing bits here and there but generally, I was getting bored with it.

I agree with some of the reviewers who said “what is the plot of this movie”! It just felt like a bit of a pickle overall.

The movie can be found on Netflix, at least in the region we are in.