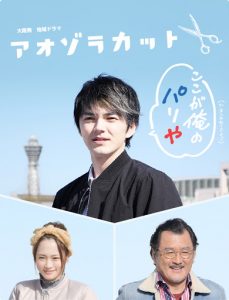 Aozora Cut (アオゾラカット) was one of those shows I just stumbled across, didn’t know anything about but thought I would watch anyway.

Kawamura Shouta returns home to Japan, from Paris, to attend his mother’s funeral. He comes from a family of hairdressers and after beauty school decided to move to France rather than stay with the family business due to historical conflicts. Returning home he has to face up to the family issues he left behind.

The short movie starred two actors I am very familiar with from Ossan’s Love.

Hayashi Kento (はやし けんと) plays Shouta extremely well. The actor’s had many roles in different shows and in this one gets to, surprisingly, test his English Language skills. I am not sure if he speaks English but he does a pretty decent job.

Yoshida Kotaro (よしだ こうたろう;Yoshida) plays Goro, the father, and is a veteran of the acting world with many performances in his resume including stage, TV and movies. He was of course very good in this show too.

Anything that Hayashi Kento appears in does tend to be on the cute and this show is no exception. There are many little twists and turns to surprise the audience. It wasn’t a big-budget film, more like a low budget on-screen play that would work well on stage, but was very well executed. I haven’t seen many review’s of the show and the ones I have seems to be negative, don’t let them spoil your enjoyment of it, I do recommend it. If you are a fan of any of the above actors it is a must-see.