Because of You Review

Because of You is an LGBTQ TV show from Taiwan, this is my review. 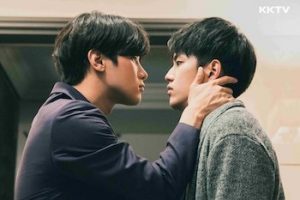 This is a very basic description of the show.

Because of You is about 3 brothers who come from a wealthy family all of whom have different mothers. They all compete against running their fathers company. Oh, they are all gay. A new person comes into the life of their family who could actually be the 4th brother.

Two brothers are from Taiwan and the other is from South Korea.

The two prominent actors in this show, in my opinion, are as follows:

Lee Shi Kang (이시강)
He plays the Korean brother Yuan Jun Cheng. The actor is the most prominent of the cast, Lee Shi Kang has appeared in numerous TV shows. In 2010 he debuted as a member of the K-Pop boy group, KINO. I am currently watching him in South Korean soap opera A Man in a Veil.

Mu Ji Hsu (徐謀俊)
He seems a fairly new actor although he does look familiar, I wonder if I’ve seen him in something else?

Fans appeared to upset that the show was only 10 x 15-minute episodes and hoped for some more.  There will, however, be a second season.

Because of You has a basic good storyline going, not just a “falling in love” story, which was an immediate draw to watch it. However, I don’t know whether it was the direction or the story being too short for 10 episodes but something was missing, I just can’t put my finger on it. Maybe the writer had the basics rights but didn’t expand on them well enough.

Each of the couples had their own side story and they fit that into the show very well. To avoid the gaps that part of the show could have been expanded more.

The oddest thing about the show was the South Korean brother only speaking in Korean and the rest of the cast spoke in Mandarin, however, they all appeared to understand each other.

Overall, I would say the show is very watchable, nicely presented, good locations, and sets the groundwork to bounce into a second season where hopefully they can develop the characters more. I would rate it 3/5.

The show is available on Viki and other good services.