I thought Brain Man would be a cheesy superhero type adventure, given the odd title, but it turned out to be quite the opposite. 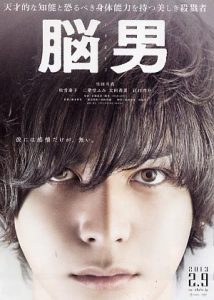 Brain Man (脳男) is a Japanese movie released in February 2013. A serious of random explosions occur which leads the police and psychologist Mariko Washiya to come across Ichiro Suzuki. Ichiro is also known as “Brain Man”; he is without emotion, doesn’t feel pain, and has extremely high intelligence.

Ikuta Toma plays Ichiro Suzuki
He was very convincing in this role, his character was kind of frightening and every small move he made, and the way he did it, was very important for the part. Toma started his entertainment career in a child band called Strawberry Parfait but was more widely recognized in the 2007 Fuji TV drama Hanazakari no Kimitachi.

Matsuyuki Yasuko plays Mariko Washiya
She played this role very well too. Yasuko is an actress and singer with a very decent career in TV and film.

This was a “who is right” and “who is wrong” type of drama, I won’t give anything away.

It was fairly violent, not too bad, and that usually turns me off a movie as I do prefer cute and cuddly. They probably could have made the movie without it but may not have been so intense as it was supposed to be.

I don’t think there was anything spectacular about the cinematography apart from the scenes showing “Brain Man” in his isolation and how they focus on his every move to make him a little scary or mysterious.

There were surprises throughout the movie, including at the end as well. I notice on Asian forums that many ask what the ending is like to determine whether it’s worth watching, this one won’t disappoint.

I felt the script left things open for a potential follow up movie, but there wasn’t. I would rate it as 4/5, the markdown was the violence and maybe the overtop acting of one of the characters.