Bromance is a television series that was made in Taiwan, broadcast between 18th October 2015 and 21 February 2016. The series consists of 18 episodes with an additional 19th episode summarizing the story with some behind-the-scenes clips. It was made by TTV. 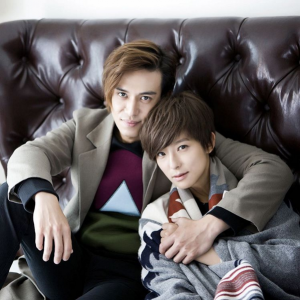 The main stars of the show were:

A soothsayer advised a family that a female must pretend to be a male until her 26th birthday. Everything seems to go well until she (Pi Ya Nuo) meets Du Zi Feng and falls in love with him. How will he react when she reveals that the man he loves is really a female?

Bromance can be found on Netflix but unfortunately they broke it down into 30 minute episodes. I recommend the original non-edited Taiwanese version of 1 hour 15 minutes each episode. Often Netflix doesn’t get the translations right and will chop it up into chunks that aren’t helpful.

Every now and again there is a TV show that you know will leave a lasting impressions on you. The Taiwanese show Two Fathers was one of them, Bromance is another.

“So Beautiful Is My Life”, a line in the theme song, and the show reflects that statement. It is jolly, positive and bubbly. When there is a lot of negative things happening in the world this is the show to lift your spritis. There is something about the combination of talent they gathered for the show, behind the scenes clips I found on YouTube suggests the cast and crew had a lot of fun with all of them getting on so well.  This attitude spilled over into the program.

It is another Asian crossdressing type of show but addresses same sex relationships in a very positive light, this is typical of how I view Taiwan, very open minded and accepting of people.

There may have been some improvement in the storyline but if you just appreciate the show for what it is, a bubbly adventure on the road to accepting people, I’m sure everyone would enjoy it.