The Government Hospitality Fund (GHF) was a British government quango responsible for organizing and paying for lunches, dinners, receptions and theatre suppers for Ministers and visiting foreign dignitaries to the United Kingdom. This also included functions during State Visits. The events ranged from small parties of around 10 but the largest event I organized was a reception for 400.  Buckingham Palace organized its own events but all government departments came under the responsibility of GHF even if The Royal Family was in attendance.

I used to work for Government Hospitality for five years and thoroughly enjoyed the job, best I have ever had with so many memories. I had to change jobs every 3-4 years but managed to stay in this position as long as I could. Whenever I see an item relating to GHF on a site like eBay I usually pick it up, if I can, to add to my collection.

I recently bought this envelope from eBay postmarked 3rd June 1974. This was before I joined the organization but it is pretty much how I was told to address envelopes, it was a matter of strict protocol.  Every full stop (period) and comma had to be correctly done. 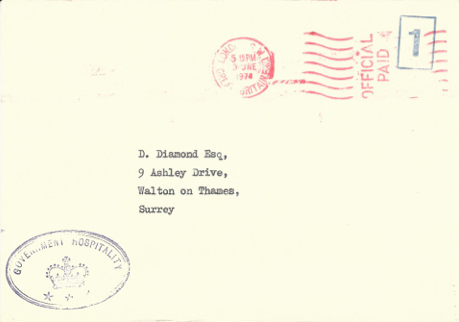 The back of the envelope, shown below, had a red embossed Government Hospitality logo on the back.

Professor Derek Diamond, whose name is on the envelope, is no longer with us unfortunately but he made a significant impact during his career.  Please read the following to find out more about him: