Cherry Magic! Thirty Years of Virginity Can Make You A Wizard?! is a Japanese movie that was released on 8th April 2022 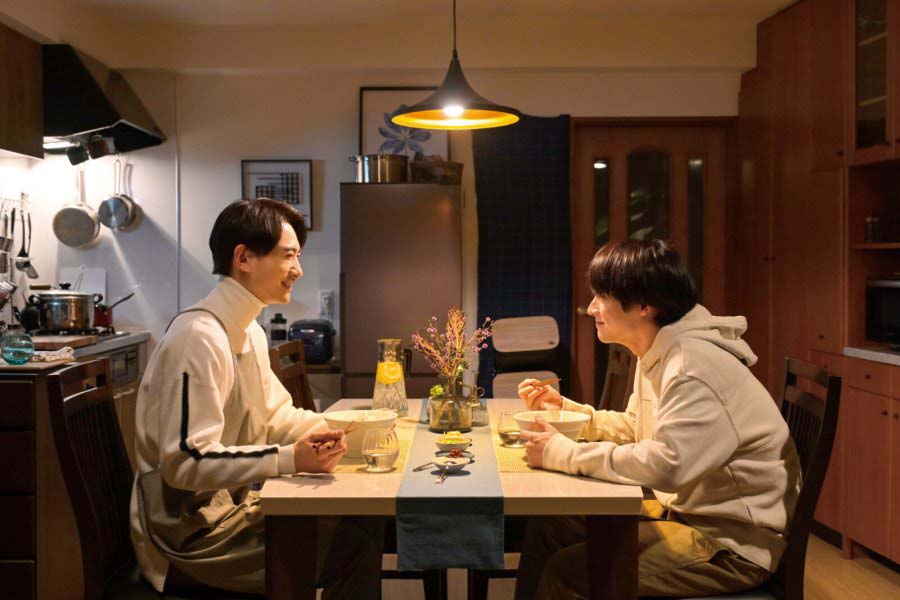 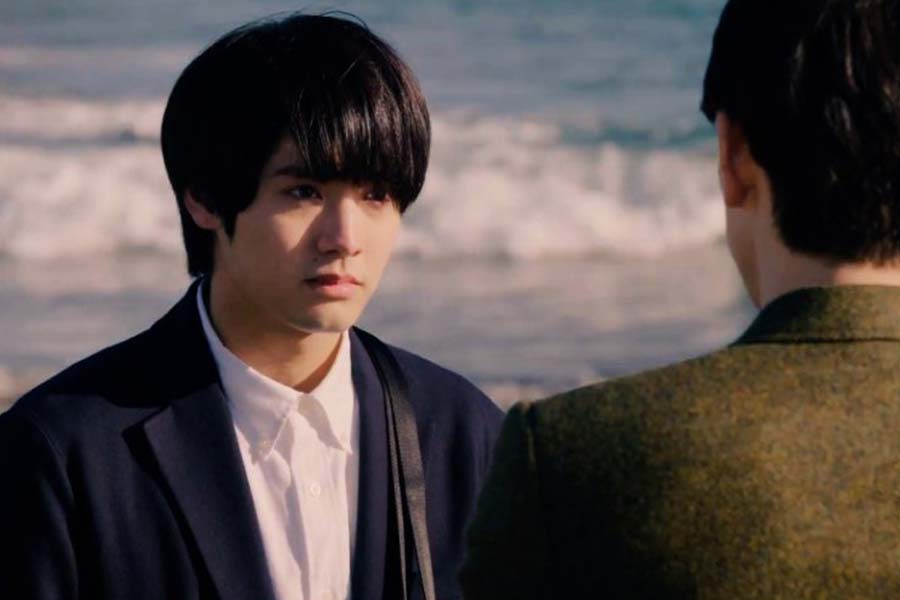 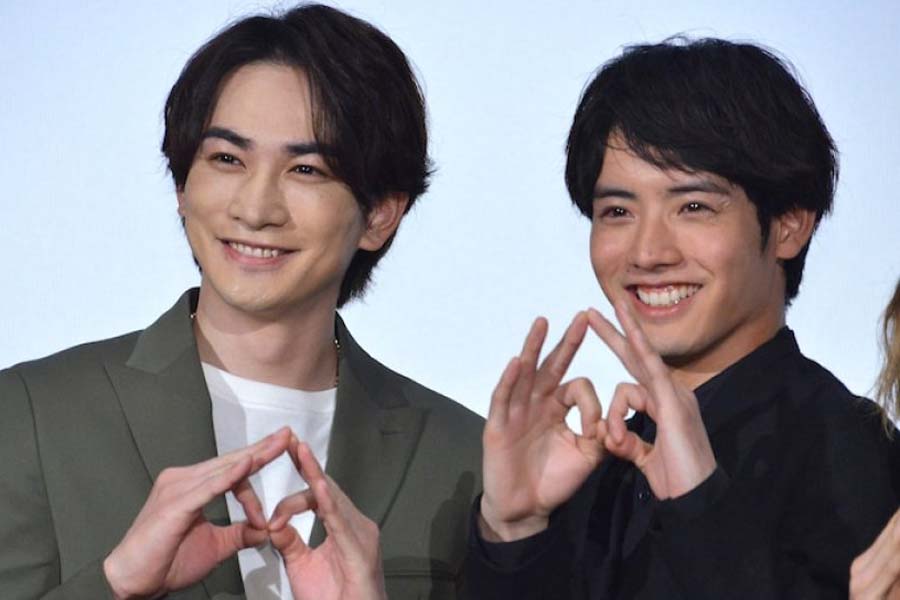 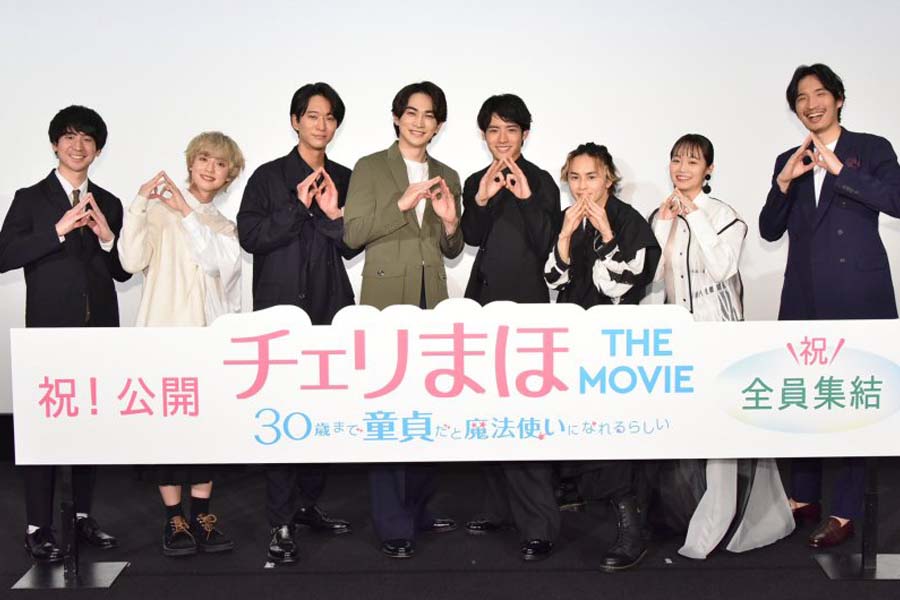 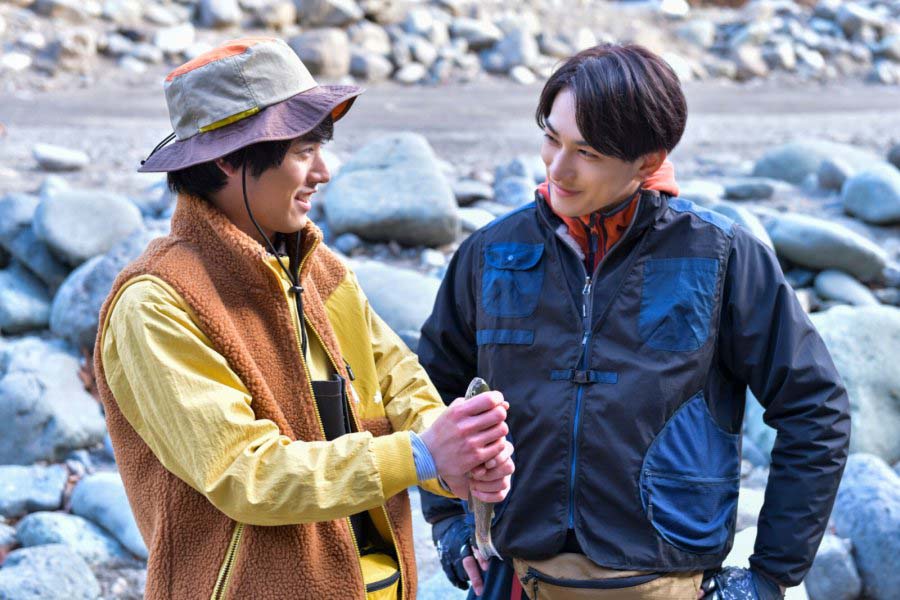 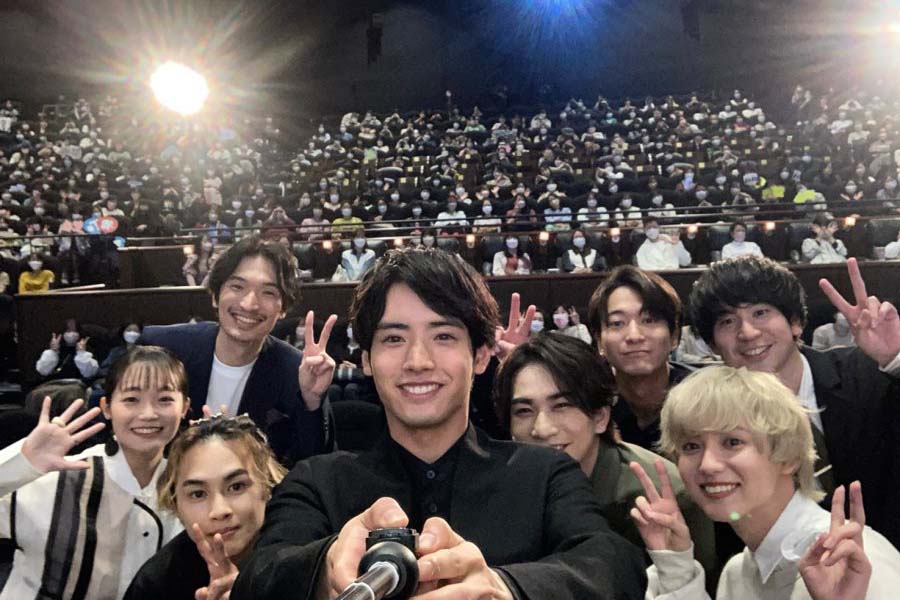 The film follows events of the series but this time Adachi has received an order from the company to be transferred elsewhere. How will both Adachi and Kurosawa deal with this? 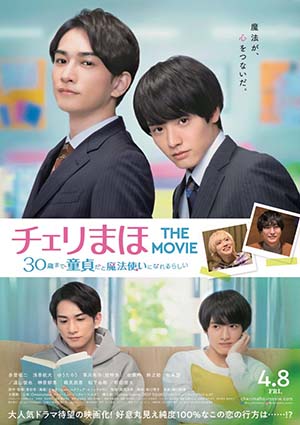 All the favourite actors/characters were back in the movie.

Akaso Eiji (赤楚衛二) as Adachi Kiyoshi
The only show I’ve seen Akaso in before is Kamen Rider although he has appeared in many other productions. He is an actor and model. He dropped out of University to join the world of entertainment.
Instagram

Machida Keita (町田啓太) as Kurosawa Yuichi
He is very much in demand starting his career in 2011 when joining the stage group EXILE, which he eventually had to step away from due to a calf accident. Not only is he very much in demand as an actor but has many product endorsements too, if his Instagram account is anything to go by.
Instagram

Asaka Kodai (浅香航大) as Tsuge Masato
The actor appeared to have lost a lot of weight since the series, I almost didn’t recognize him. Again, another very much in-demand actor whose TV and film career appears to have started in 2011 although signed by an agency in 2008.
Instagram

Yutaro (後藤優太朗) as Wataya Minato
He is just known as Yutaro. He is a model and actor who started his career in 2018 and has numerous TV and Film productions in his portfolio.

Kusakawa Takuya (草川拓弥) as Rokkaku Yuta
He is an actor, model and dancer. He has much more TV production in the acting portfolio than in films. He does appear to be very popular too.

I had been waiting to see this film for some time and was so pleased to see it.

This was like an extended episode of the TV series and I’m so pleased they kept it that way.

There was nothing extravagant about the movie, it just focused on the storytelling. The story was centred around Adachi still having his magical mind-reading powers, being forced to move to another city by his company and subsequently meeting the parents. There are some dramatic and tense scenes but also comical as well. Old friends come back with their small story arcs, and viewers will be interested in knowing what happened to them as well. The ending was everything that I wanted it to be.

I’ve no idea how close the TV shows and movie is to manga book at all, I haven’t had time to read them. The movie has made me more enthusiastic to get into them.

The show is very unique to Japan, I would be hard pushed to find similar quality entertainment in the west. I would give the movie 4.9/5. If I could have changed one thing I would have increased the pace. It was just cuddly entertainment and storytelling. So wonderful.

I notice there is a Thai version of Cherry Magic (30 ยังซิง) coming in 2023, the exact air date is to be decided. 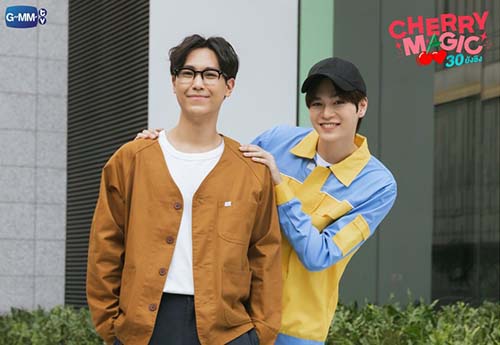 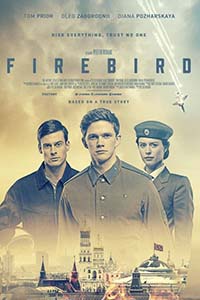 This is my review of the LGBTQ movie Firebird which had an international release date of April 2022.

Even though the film had its premiere at the LGBTIQ+ Film Festival in London on 17 March 2021 it didn’t hit international cinemas until 29 April 2022.

The movie was co-written by Peeter Rebane and Tom Prior, the latter of whom was one of the lead actors.

Firebird is about a young soldier Sergey Serebrennikov, played by Tom Prior, who has a clandestine love affair with pilot Roman Matvejev, played by Oleg Zagorodnil. They are on a Soviet Air Force Base at the height of communist rule in 1970 where same-sex relationships aren’t legal. The story follows their ups and downs of trying to be together on a more permanent basis, a story about romance versus duty.

The cast was unknown to me.

Tom Prior played Sergey Serebrennikov.
He is a British actor who was also the producer, music supervisor and screenwriter of the movie. A convincing acting performance and the movie was packaged quite nicely.
Instagram

Oleg Zagorodnil played Roman Matvejev
He was born in Ukraine and from what I have heard he is back there for Russia’s invasion.
Instagram

The Story was so much better for me than other LGBTQ films, it was a romantic film with the backdrop of life in the USSR and in their military. The story kept moving, with no stagnation, there was always something going on, new scenarios that would challenge the characters.

The set was convincing even though it was filmed in Estonia. Its “look and feel” did seem earlier than the 1970s that it was set, but maybe accurate for Russia, I wouldn’t know. All the apartments seemed extremely drab, something you would expect in the UK after the second world war. Maybe this is how it was back then. The ballet dancers looked very scary!

The planes that were flying looked like CGI, this was in a number of clips. Most of it was quite well done, the planes flying overhead from the beach looked a bit unconvincing but really the story was the main focus.

This was a movie without any drugs or other things that come with many LGBTQ dramas, so that is a good thing. It focused on the couple and the lives of some people around them.

It was interesting to read reviews by some Eastern European people who did say it was realistic for Russia during that time period, I guess you couldn’t ask for a better thumbs up than that. The reviews were kind of mixed, as expected, mostly good, some very low commenting as though they had never seen it. Both LGBTQ and Asian movies receive the same treatment online.

I felt for actor Oleg Zagorodnil who I believe is in Ukraine as Russia attacks his country. I’m not sure what role he is playing there but I’m assuming he can’t travel to various events related to the promotion of the film.

So, good entertainment all around, I will give it a 4 out of 5.

B-Boy Blues is an American LGBTQ movie that was released in 2022, this is my review.

A college-educated journalist from Brooklyn and a “homeboy”-bike messenger from Harlem fall in love. They are two guys from different backgrounds and this story is about how they face their cultural differences.

The film is based on a screenplay by James Earl Hardy who is known for his writers on the African American LGBTQ experience.

The movie was directed by Jussie Smollett, who faced some legal challenges recently, although I’m not sure what happened.  Evidently, this is his first creation since the so-called controversy.

Timothy Richardson plays the main character Mitchell. Timothy has 12 acting credits, according to his IMDB biography, but has also had expertise in the areas of cinematography, directing, writing, editing and producing.

Thomas Mackie plays Raheim/Pooquie, the somewhat on/off partner of Mitchell. Thomas has numerous acting credits back until 2015 including roles in the TV series Kaleidoscope, About Him 2: The Revolution, and Triangle.

My Review of B-Boy Blues Movie

Like some other LGBTQ movies, same as Asian movies, it gets really mixed reviews, from “best film ever” to “hated it”. The score on IMDB is quite unfair as the majority of those who have written reviews gave it a 10/10.

At first, there seemed to be a lot of clichés in the movie but the story developed into its own as the film progressed.

As the summary states, the movie is really about two people who come from totally different worlds trying to get on with other, and those who are close around them. The child actor was very cute and quite the ham, he was a brilliant addition. The immediate family around them were pretty cool characters and we thought “we know someone exactly like that”.

The film had humour and drama, they all fit in well with each other. Often it felt like a “fly on the wall” type film. There was some good editing, such as flashbacks. The musical score matched the staging of the film. It was great to see some familiar sites in New York City. It was more realistic than other LGBTQ films.

Negatives about the movie: Well, I do think there were too many clichés. The way Mitchell took Pooquie back was slightly unrealistic and quick, but maybe this happens in real life, not in my experience, but what do I know.

Another important film exploring the diversity within the LGBTQ movie. A film that I’m sure people will watch and talk about for many years. I will give it a 4/5, worth seeing.

The movie is available on BET+ and is one of their most popular acquisitions as I write this. 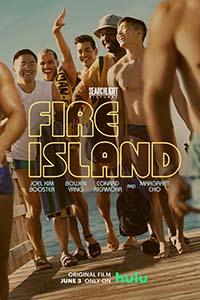 Fire Island is an LGBTQ film released on 3rd June 2022 on the Hulu network to coincide with Pride Month.

A group of friends make their regular trip to Fire Island, but this time their journey that challenges their relationship.

The only person I recognized in the film was Margaret Cho who is an icon in herself and to the LGBTQ community. I think it was quite a coup to have her involvement which would draw an audience in itself.

This is a more Asian focused story, written by and the lead actor Joel Kim Booster. According to his Internet Movie Database biography he has been writing since 2013. He has also appeared in quite a few TV shows. If social media is anything to go by this work will boost his career as he becomes an LGBTQ icon.

The movie addressed a number of issues and challenges within the LGBTQ community. The story revolved around a group of friends dealing with these issues which challenged their relationship between themselves and others.

In my opinion, the character that was written and played the best was Will, actor Conrad Ricamora, this is the only one in the film that I could identify with. All the other characters just seemed to be a mess and outlined many reasons why I feel that I don’t belong anywhere in the community. Most of the characters were overly camp, swearing, doing drugs, vindictive, gossipy, and having sex with anybody, and a lot of what they were saying I couldn’t really understand or follow. I think the Will character was part of the point of the movie, and this will be my main (positive) takeaway from it. I was also pleased that there were at least a couple of characters that didn’t fit the body stereotype, even though one of them, the black character, was sidelined in the story. The movie had a bumpy start but ended on a high note, similar to Beautiful Thing.

Apart from the story and characters, having a diverse cast is so important and that is such a positive and important step.

The reviews on Internet Movie Database ranged from “this is the best thing since sliced bread” to quite toxic comments. Asian TV shows and films do seem to be reviewed much worse on that platform than anywhere else, and the fact that this is an LGBTQ film made them even more toxic. It’s so sad.

I do prefer LGBTQ shows from South Korea, Taiwan and Japan, maybe they aren’t as “realistic” and focus more on the good in people rather than all their faults, and have other elements of the story like SciFi, business, food etc.

As for a score, I will give this a 2 out of 5, it just wasn’t my thing. It’s great that others are enjoying the movie and I’m sure it will go down in history and be remembered forever.