Masterchef Singapore is a food competition show under the umbrella of the “Masterchef” brand. 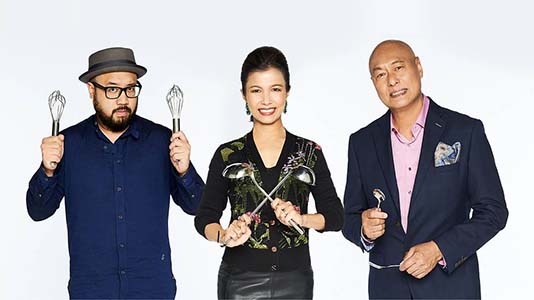 It is produced by Beach House Pictures and Motion Content Group and broadcasts on Mediacorp Channel 5 in Singapore.

Chef Bjorn Shen
He is a chef and owner of Artichoke, a Middle Eastern inspired restaurant in the arts district of Singapore. He holds a Bachelor’s in hospitality, a Masters in marketing and is a lecturer at the Culinary Institute of America in Singapore.
Website | Instagram

Chef Audra Morrice
Audra is a cook, author, producer of her range of all natural gluten-free products and television producer. She is also a winner of Masterchef Australia. Before Masterchef Singapore, there was Masterchef Asia, which Chef Audra hosted, however, there wasn’t a season two due to the channel being bought out I believe.
Website | Instagram

Chef Damian D’Silva
He comes from a chef background. After spending time in Italy and France he returned to Singapore to create Citrine Chocolat. He then went on to The Soul Kitchen which specialized in Singapore heritage cuisine. He went to Restaurant Kin where he is Executive Chef.

I’ve watched 3 or 4 episodes of the British version and didn’t really take to it, therefore wasn’t an avid viewer. I’ve not seen any versions from other countries including the Canadian one.  I watched the Singapore version as it seemed way more interesting.

The good aspects of the Singapore version:

However, the good outweighs the minor issues I have and I look forward to watching more seasons of the show.

I would give it a 5/5, such a great program. Looking forward to season 4.