The Rebel (Dòng máu anh hùng) is a Vietnamese movie that was released on 27th April 2007.

From IMDB:
France employs local secret agents in Vietnam in 1922 to eliminate resistance. The rebel leader’s pretty daughter gets captured. Later an agent seems to have fallen in love with her and helps her escape. He flees, too. Lots of martial arts.

Johnny Tri Nguyen plays Le Van Cuong
He was born in Vietnam. He immigrated to the US and won many awards for his martial arts skills. He has starred in numerous US production including as a stuntman for the Mortal Kombat series and as a body double in Spiderman 2. He also co-wrote the Rebel film.
Instagram

Veronica Ngo plays Vo Thanh Thuy
She is an actress, producer and director.  She has acted in many productions. She was in Star Wars: Episode VIII – The Last Jedi playing Paige Tico.
Instagram

Dustin Nguyen as Sy
Of course, Dustin Nguyen will be very familiar to US audiences as he played Officer Harry Truman Loki in the TV series 21 Jump Street.  He continues to be popular in many productions. 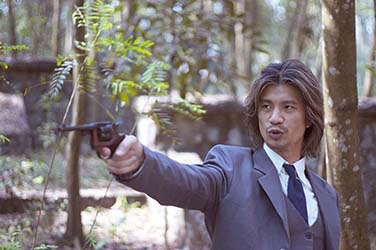 This film was promoted on another DVD we were watching and since we’ve never seen a Vietnamese film we picked this up.

The film was a winner at the 2007 Vietnam Film Festival for its cinematography. I agree with that, it was very well filmed especially the scenery it had in it.

The martial arts compared with other films was, I would say, top-rate. I am no expert in this field but the stunts were very good.

The film was quite violent and I didn’t really enjoy that aspect of it so much, I wouldn’t go out of my way to watch it from that perspective.

From a historical perspective, it did highlight atrocities that westerners might not have heard about, so it is partly educational.

I wouldn’t say the script was mind-blowing, I think this film was mostly action orientated. I wonder if it will prompt anyone to review what happened in that time period.

If you want a kick-ass type of movie I would say this is one to add to your collection. Personally, I would rate it as a 3/5 mostly because it wasn’t really my type of movie.

It can be a little difficult to find on DVD. I’m not sure if any streaming service has it.