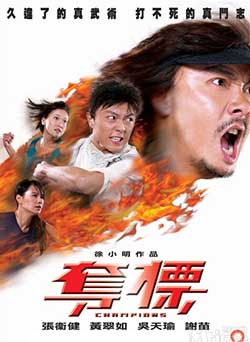 Champions (奪標) is a Hong Kong movie that had a release date of 13th November 2008.

This is the official description of the film:

“Inspired by real events. When China announces that it will field its very first Olympic team, which will include a handful of martial artists to demonstrate Wushu to the world for the very first time, millions across the country compete for the honor of representing their national sport. With so many diverse styles and so many skilled, determined fighters, the elimination bouts are grueling. A select few are chosen, amongst them street hawker and scallywag Zhang Feng and earnest patriot Bao, who’s dreamed of going to the Olympic Games. However, the road to the games is fraught with hardship and heartbreak, and in getting there Zhang Feng and Bao embark on a journey that will test their strength, skill and spirit to the limit, and their willingness to sacrifice in ways they could never have imagined”

The only cast member I recognized was Dicky Cheung who played the main character Cheung Fung. I actually didn’t recognize him at first until I saw the cast list after the film then it suddenly dawned on me. Of course, Dicky is very famous in Hong Kong and has appeared in many film and TV productions.

The public reviews on this movie weren’t very good, in the 6/10 region, so I wasn’t expecting a whole lot out of it. However, it was much better than anticipated.

Screenwriter and Director Tsui Siu Ming did a brilliant job with it. I have to mention Lincoln Lo for the music which I found to be equally uplifting as the movie was. The fight scene choreography was amazing with some going on for a very long time, it was very well executed.

There appeared to be some CGI in the movie, in particular movie up ahead around the city. I think parts of the ship were CGI but not all the scene, it was difficult to tell. Parts of the film had fantastic cinematic quality, one part of it reminded me of the film Oliver although much scaled down.

There wasn’t a dull moment in the movie, it was quite fast paced, with something happening all the time. Parts of the storyline got a bit muddled for me here and there but maybe it was because some things got lost in translation.

I will rate this film 5/5. It seems I haven’t given this score in a while.

The film can be found on TubiTV, they have a lot of interesting Hong Kong movies there. Tubi had it listed as a 2011 release, but I think it was 2008, maybe the later date was when it was released elsewhere?