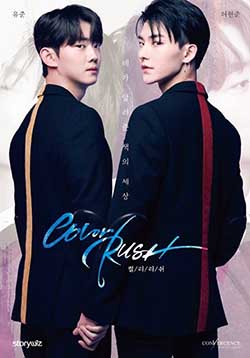 Choi Yeon Woo cannot see any colors apart from those in greyscale, rarely people with such a condition can see color if connected to the right person. When Go Yoo Han, a classmate, takes his mask off, Yeon Woo can suddenly see color. This can not only open a whole new world for the color-blind person but can also lead to a dangerous obsession. They start to form a mutual bond between each other…!

In the meantime, Woo, along with his aunt, is trying to find his missing Mother who also has the same color-blind condition.

The story is adapted from the book 컬러 러쉬 (Color Rush) by Se Sang.

Each episode is around 15 minutes in duration, there is a compilation movie of the same name. There are rumours of a season two.

I hadn’t seen the two main actors in this series in any other productions although both have had decent careers.

Yoo Jun (유준) plays Choi Yeon Woo
He was an advertising model in 2009 and acting since 2012 in TV shows and movies.

Hur Hyun Jun (허현준) plays Go Yoo Han
His main career seems to have been in singing, modelling, and dancing. Color Rush was his first acting role, it seems he did a decent job with this character.

Well, where shall we start. might be best to dissect each element.

It was a good story line. The concept of how a color-blind person can cured temporarily by a certain person is more or less a medical science fiction element of the show. “Mono” in real life is short for another condition, so not to be confused with that. The story ranges from Woo not wanting to connect with Han as he is aware of the dangers a “Mono”/”Probe” relationship, to Woo learning about colors from Han, to trying to find the missing mother, and how intimate the two guys relationship is becoming. The two main characters grow as the story progresses and there are little surprises along the route.

Good performance from all the actors, I was surprised to learn it was Hur Hyun Jun’s first endeavour into that area.

The show didn’t seem to flow as well as I had hoped, not sure if that was down to the directing or the way it was split into 8 x 15-minute chunks. There wasn’t something quite right to me, can’t pinpoint it.

There were some minimal special effects in the show, the moment when Choi Yeon Woo could see color, this well done.

It was worth watching but there was something missing with the how things flowed.

The show is on Viki and according to some on Apple TV.