I was thinking of doing a daily COVID19 diary but thought that would be too much and I still have work to do.

The past couple of days has seen a lot of developments in the news, it’s difficult to keep on top of it all.

For BC, CBC produce a fantastically useful daily update.

I notice an increased level of stress as people start look at someone to blame. US blames China. China blames US. US blames Trump. Trump blames Obama. UK blames Boris. I feel the blame game is quite unhelpful at this time, there might be enough of it to go round every where but while people get in a tiz this is taking the energy away from saving lives.

On Tuesday I received my hair trimmers via Amazon. Amazon had announced it was going to focus on essential items so I might have ordered this just in time. I ordered them because I saw videos from Wuhan of residents trying to cut their own hair as stores close. Our local hair dressers is also closing for good, nothing to do with the virus, so thought his might be a good time to learn how to cut my own hair.  Picture below, the Panda didn’t come with it!! 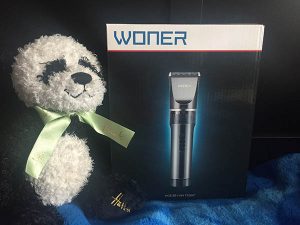 While I was waiting for the nice Amazon delivery guy Don went to the supermarket. It was busy but Canadian Superstore had all aisles open, thankfully. They were virtually out of soup and milk, even at 9.15am, not good. I hope they refilled their shelves later in the day. We are all set with everything we need for a while.

I was most displeased that Facebook decided to delete a post that Don shared letting people know the Dollar General store had special hours for seniors only. This was related to yet another error at the company relating to its algorithm, they said had nothing to do with COVID19, but clearly was. The last thing we need are headlines from this company who don’t have a good reputation anyhow.

I am continuing to work, which is keeping my time away from social media and the news.