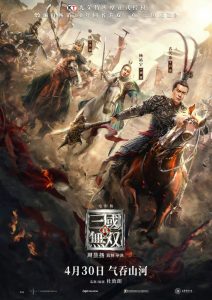 This is a review of the Chinese film Dynasty Warriors which can be viewed on Netflix.

Let’s see, how would I describe what this movie is about. Appears to be a bunch of warriors from all over the country rising-up against the evil Dong Zhou. The story is more focused on three characters with amazing skills trying to save the day.

I’m not sure why these prominent actors signed up for this movie but these were ones I recognized:

Oh dear, where do I start with this one.

There was action from start to finish of this film. It was more about the special effects than the story line, however, neither were done that well. The characters didn’t really have any development, they were just there to do battle. There weren’t any strong female characters, the women that had roles barely spoke and their storyline was a little bizarre. As far as I could make out the three main characters saved the evil guy, not knowing who he was, but then went onto be his enemy.

We see part of the story where this evil bloke, with the biggest feather you have ever seen, commits to marrying someone he doesn’t know, not even her name, and as a seal of his love stabs himself with a knife just before going into one of the biggest battles of his life. It does not make any sense. Then, his girlfriend goes off to marry the evil character against her will then the film finish with no clue whether she will be saved. We also don’t know whether the good guys will go onto beat the baddies. There was also no “To be continued” message at the end of the film.

The movie is based on a Japanese game so I guess the ending might be where that will take you when you are playing it. I’m not sure the film stands on its own very well.

Was post-production rushed or interrupted due to the pandemic? I wondered why it was constructed so poorly.

Give it a miss. I would give it a generous 2/5, for special effects.