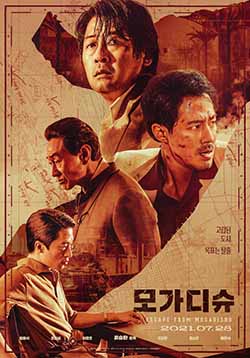 Escape from Mogadishu (모가디슈) is a South Korean film released on 28 July 2021.

The movie is based on a true story. “Escape from Mogadishu” tells the story of personnel of the South and North Korean embassies attempting to escape Mogadishu, the capital of Somalia.

In 1991, a civil war broke out in Mogadishu. The South Korean embassy’s staff and their families became isolated. One night, a group from the North Korean embassy knocks on their door asking for help.

I haven’t heard of any of the actors in this film.

Kim Yoon Seok (김윤석) plays Han Shin Sung, the South Korean Ambassador
He has appeared in mostly movies but is also a screenwriter and director.

Heo Joon Ho (허준호) plays Rim Yong Soo, the North Korean Ambassador
It looks as though his big-screen career started in 1992, and the small screen in 1993. He has appeared in many productions. Other members of his family are well-known actors as well.

All the actors did an outstanding job with this movie.

This was an outstanding and memorable movie.

I have to start out by saying, even though it’s based on a true story it is more “inspired by events”. The former South Korean Ambassador talked about this period in time, read about it here.

I was particularly interested in the movie because a work colleague of mine was posted to Mogadishu in the 1980s, she was a Personal Assistant with the British diplomatic service. Her life there was pretty good, she had her own three-bedroom house on the beach and staff to look after her since they were cheap to hire. Hiring staff also meant putting income into the local economy where those people may not have had a job otherwise.

There was a certain vastness about the movie, it really felt as though you were taken into a city. The devastation on the streets and children carrying guns added to the realistic representation of the movie.

This was generally about the relationship between South and North Korea. When the North Korean mission comes under attack they only have one choice but to ask the South Korean’s for assistance. Both the Ambassadors, staff and families had one thing in common, to escape the city, so the two sides called a truce and worked together to figure out how they were going to get out of the country. Both the South and North had built up a relationship through their common adversities.

Parts of the film were incredibly powerful as there were some continuing tensions but how each side protected each other to achieve their common goal. It reminded me of the Christmas truce between British and German soldiers in 1914 during the 1st World War [read more (via Imperial War Museum UK].

I’ve been unable to find out information on the side actors in this film, the ones who played the Somali people. Some of them had significant roles so it would have been nice to know who they are.

There was some CGI in the movie, although at first glance it was hard to tell. The dogs were most definitely CGI. Whether some of the town was CGI I would have no idea.

I would give this movie 9/10. It’s one of those “must-see” films that wasn’t over-hyped.