Fire in our Neighbourhood 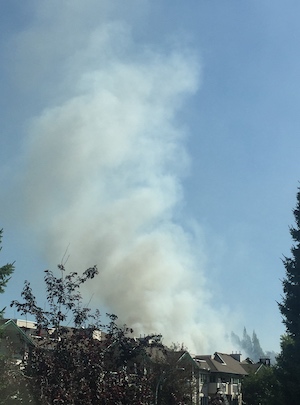 On 3rd August there was a major fire in the apartment block right opposite to our community here in Surrey, British Columbia.

We were having dinner at around 17:45 in the evening and started to hear a lot of commotion outside. Our apartment doesn’t face the street so we couldn’t tell exactly what was happening and kind of just went about our business as usual. Living surrounded by seniors it wasn’t unusual to hear emergency services coming and going anyhow.

It wasn’t until slightly later we realised the gravity of the situation. A major fire had started in the apartments across the street. The facade of the apartment affected looked just as it usually does. However, we did see water being sprayed on the back of it by a fire engine, the one of many emergency services that had arrived in the area. If there is anything going on I tend to stay away as I don’t want to be in the emergency services way and I felt incredibly sick for most of the day.

Later in the evening, the wind must have changed direction and blew the smoke over our community. It was a sweltering day but had to close all the windows because of the overwhelming smell. So, not only did I feel sick, but also hot and overwhelmed by the smell of the smoke. All these were minor issues compared with how events unfolded for the victims of the fire.

Although pending an investigation by the authorities the fire was reportedly started by an unattended BBQ. The structure of the building, especially the roof, made it difficult for the fire brigade to put out, who were on-site for two whole days. They left by Thursday morning when the area has been gated off and a 24/7 security guard posted to ensure looters, and such don’t attempt to enter the now abandoned property.

The local paper, The Surrey Now-Leader, has a good summary of what happened. On day 2 of the fire a YouTuber flew over our area with a drone to record what was happening at that point:

On the event of the fire the evacuees were led into our community by a team of volunteers including the Emergency Preparedness team. They were able to provide them with water, shade, toilets, comforting them and so on. One person was in distress after losing a pet in the fire. The media and other observers were also able to set up using our facilities. It’s great that all these people came together.

It’s very unfortunate that many of those will be unable to return to their home for some time to come. With the extent of the damage, it will take an exceptionally long time to fix what has been destroyed, I’m not even sure if the building must be torn down and rebuilt. I guess the coming weeks will have answers for those affected.

It’s tough to plan for such events but with potential flooding, wildfires, earthquakes, and other effects of climate change one must do what one can to ensure you can get back on your feet quickly after a disaster.