For A Few Bullets Review 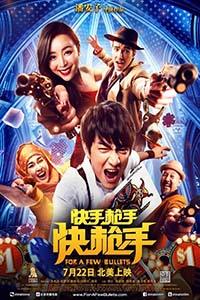 For A Few Bullets (快手枪手快枪手) is a Chinese movie that was released on 16th July 2016.

The official short summary of the movie:

“A professional thief must team up with a special agent to stop the Japanese military from stealing a national treasure.”

IMDB describes it as “A con man and a Chinese government agent each has their own reasons for trying to recover a historical artefact from agents of Japan.”

I guess that is pretty much it.

Lin Geng Xin (林更新) as Xiaozhuang
This actor is ranked on the Forbes China Celebrity 100 list It appears he has appeared in quite a few TV shows, dramas and movies.

Zhang Jing Chu (张静初) as Li Ruoyun
Another famous actress was named one of “Asia’s Heroes” by Time Magazine in 2005. Numerous forthcoming movies and TV shows are in the works. She looks busy.

Other websites had reviewed the movie with relatively low scores, such as 5.3 on IMDB. Some reviewers went from “rubbish” to “brilliant”.

From start to end there was always something going on in the movie. It was very much action orientated. The comedy blended in well even though it was an “expected” incident rather than come as a surprise.

They really tried to put in everything. Train, boat, aeroplane, desert, city, hallucination inducing murderous steampunk phantom, the dead boyfriend comes to life and some rude Carry On movie-style antics. People are right, it was like an Indiana Jones or a movie that was making fun of it.

The thing that stood out for me was the cinematography, it was beautifully filmed, especially the desert sequences.

It is available on Asian Crush and Tubi.