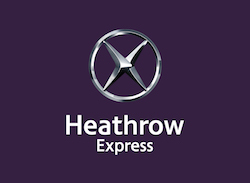 Heathrow Express is a train service from Heathrow International Airport to Paddington Station in the heart of London. I prefer flying into Heathrow rather than Gatwick because I find it less stressful and more convenient due to good access to Paddington. The train takes about 15 minutes and although more expensive than other routes it’s still worth it for the convenience. I’ve also been happy with the performance in the past, never had a problem, that is until now.

This is a review of my journey on Heathrow Express in March 2019.

When printing off the tickets a QR code was split over 2 pages. This is because they are designed for A4 paper and not for US letter size, therefore I added them to Apple Wallet (as I discovered later that may have been a mistake).

They didn’t have a gate into the train service before and appeared to be causing customers some issues, including me.  I had 4 QR codes in Apple Wallet, 2 each for my partner and I, scanned the first one in without problems, my partner went through, swiped to scan the next one in which was rejected. The customer service rep at the gate seemed disinterested in helping out as he was talking to his colleagues.  Eventually got him to scan me in.

The journey was ok but crowded, but enough room for us to sit down, not enough room to store luggage. Some senior passengers were having issues so we helped them out.

At Paddington had problems getting out of the gate, one rep was extremely rude and wouldn’t help, he was shouting obscenities at customers, and another was just slumping against a wall with her eyes half shut pretending not to notice the chaos going on.  Eventually, she responded, with a very bad attitude, making me out to be a criminal who hadn’t paid my fare but eventually let me out. Part of me, at that point, wanted to cancel my return journey and just organize a taxi back to the airport.

At Paddington, there was only one member of staff and the gates were open. Maybe a sign that they weren’t working out due to the multiple reports of chaos on other occasions.

Plenty of room on the train and the journey was pleasant. Someone came round a read our ticket.

At Heathrow, the gates were operational, a little bizarre if they were checking tickets in the train. I had no problems using the gates but I decided to use the paper tickets, I came to the conclusion that the QR codes in my Apple Wallet would not work.

Due to the number of errors, and bad attitude, on the Heathrow to Paddington trip, my view of Heathrow Express has somewhat changed. When people arrive at the airport they are tired and want a seamless, and polite, journey to their destination. For me, Heathrow Express failed to deliver that experience.

Hopefully, they have learnt from feedback provided by customers, especially on the gates, and reviewing the situation in order to improve the journey and experience for all.  By the time I am reading this hopefully all is well.