We all know what’s it like being stuck indoors during the COVID19 pandemic but how would superheroes cope? 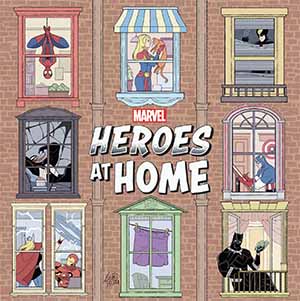 I guess the central storyline of “Heroes At Home” is a humorous look at how Marvel SuperHeroes would cope at home during the pandemic. The heroes included Spider-Man, Captain America, Thor, Hulk and more. There are several very short stories highlighting specific coping mechanisms that are quite relevant to the character involved.

The following are involved with this comic:

Written by Zeb Wells
Zeb has a decent history with Marvel comics with the majority of his work on Spider-Man. He is also known for work on SuperMansion and Robot Chicken.

Illustrated and Coloured by Gurihiru
Gurihiru has created a lot of work for Marvel but also Avatar for Dark Horse Comics.

Here are my thoughts on the initial read:

I would say this is more of a souvenir book or something for the coffee table to remind ourselves, in the future, of these strange times.