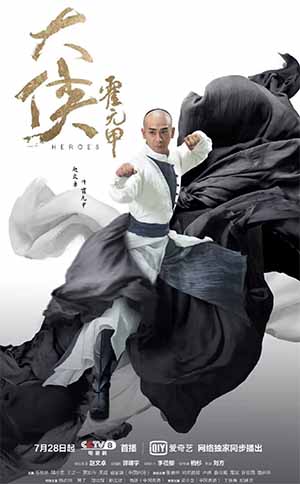 Heroes (Fearless/Fearless Heroes or 大侠霍元甲) was a 45 episode Chinese drama that was broadcast between July and August 2020.

Most websites provide the following information about the show “The Refornment Movement of 1898 resulted in the “Six Heroes” dying. Huo Yuan Jia, who was filled with patriotic enthusiasm, had been eager to participate.”

I would say it’s about the main character’s role in the invasion of westerners and Japanese into China, plus the problems with the Chinese who collaborated with them, and how he and his family find their place in that society to help the people.

Vincent Zhao (趙文卓) plays Huo Yuan Jia
He is a popular actor and director who has had martial arts training, he has been in numerous other similar productions where he uses that skillset. It is like this show was made for him or had him in mind. He is a good actor but not the best in this show.

Mao Lin Lin (毛林林) plays Wang Yun Ying
She plays Huo Yan Jia’s wife very well, she is underrated in this show. She is a very popular actress signed up to numerous other productions, I counted 5 TV shows.

Ashton Chen (释小龙) plays Chen Zhen
He was listed in the “main cast” but only appeared in half of the series. Like Vincent and some other actors he also has some martial arts experience, and it shows. He moved to the US and studied at the Professional Children’s School in New York City. He looks very short but in fact, is the same height as me.

There were other great actors in this show, too many to list here.

This was a really great underrated TV series but it did have its flaws.

There were some bumps in the script but overall it was written quite well with very good life events happening to the family; hardships and good times. Some of the “compromises” were written well, you will know what I mean when you get to them in the series. Some central characters got knocked off early on or halfway into the series, including two of my favourites so I was a bit upset about that.

The show is available to watch on YouTube, iQiyi and other online resources too.