Well, I don’t know what to say about this movie so it will be a short review. 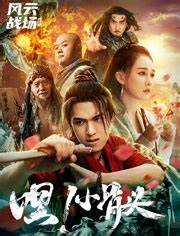 Hey! Little Bones (嘿！小骨头) is a movie released in 2020 and is a demon style comedy fantasy drama. It was difficult to assess what the movie was really about so I will paste what other websites are saying:

He is the lover of the unknown demon in a previous life! In order to recover the lost memory of the female devil, the demon explores the way from a white bone demon to a devil and makes her girlhood reappear.

I didn’t recognize any of the cast with the possible exception of Lam Chi Chung (林子聰; 林子聪) who I swear I’ve seen in something else but can’t quite figure out where.

The main cast was Tan Xin Zer (陈信喆) who played the demon Zha Ling Kong and Zhao Yue (赵粤) who played Little Bones (Jia Lan). It seems they put Zhao Yue as a support role but to me, she seemed to be a co-main character.

Oh gosh, it was awful. Was it a children’s film? Then I would see a bit of cheekiness that really was for a more adult-orientated audience. Then, maybe I thought it was a particularly cultural comedy that I didn’t tune into being a foreigner. Some of the special effects were ok. The acting was loud and over the top. The storyline was pretty difficult to follow, maybe because they were speaking too fast to keep pace with. I don’t usually find a film that I can’t appreciate some of it but looks like I found one now. Even though I can’t even rate it don’t let me put you off watching it, however, I wouldn’t recommend you pay for it as you might be kicking yourself afterwards.