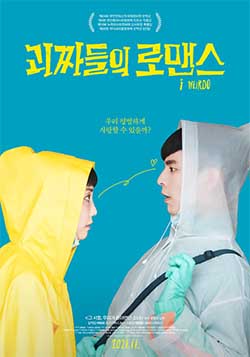 Chen Po Ching and Chen Ching both suffer from Obsessive-Compulsive Disorder (OCD). One day they bump into each other in a supermarket and form the perfect loving relationship. Things are going well until Po Ching recovers from OCD and realises freedoms he never experienced before leaving Chen Ching behind.

The entire film is shot on an iPhoneXS.

The two main actors I have seen in previous productions.

Austin Lin (林柏宏) as Chen Po Chin.
I last saw him in the Chinese series Yolk Man, it was an amazing series that is a must-see. Austin is a Taiwanese actor, singer and model born in Taipei.

Nikki Hsieh (謝欣穎) as Chen Ching
I last saw her in the Sci-Fi Romance series Meet Me @ 1006, another great series. Nikki is an actress and model.

The first thing that drew my attention to this movie was the camera work. At first, I thought something had gone wrong with my TV but noticed that it was done on purpose and for a reason. The quality of the film was good and I would never have realised it was shot on an iPhone. I would have liked to have seen some “behind the scene” work to see how they managed this process and edited it together, maybe they did that on a regular computer.

The storyline was unique, at least to me, and the characters developed well over time although I might have written it slightly differently.  At first, the characters were funny, it looked at the lighter side of being OCD. Later on, however, it became serious as they encountered obstacles.

Both Austin and Nikki did a good job. I think that Nikki was more the star of the show than Austin was, maybe she just had a better part.

The movie felt low budget. I’m not sure if it was the camera work or just because they focused on a story in a minimalist environment to reflect the characters’ condition. There was one interesting special effects sequence.

The film is worth watching and I would give it 4/5.

Really happy to have a new #Mexican restaurant in

My #queen is out in lieu of the #platinumjubilee c

Making my own #mintsauce to go with Lamb tonight.

Nice day for the beach, Crescent Beach that is.

#hailstorm here in #surreybc but our plants appear

Yesterday evening I made Chicken parmigiana for di

Mr and Mrs Duck are back…