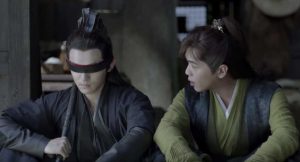 Joy of Life is a Chinese program that was broadcast between November 2019 and January 2020.

The main character is Fan Xian who was bought up by his Grandmother and following the visit from a stranger he heads to the capital to find out more about his mysterious Mother which leads him into political intrigue.

Characters of note are:

Zhang Ruo Yun plays Fan Xian. For some reason he looks remarkably familiar but looking through his CV I don’t see anything he’s been in that we’ve watch. Watching various videos online he does seem to be playing himself in this show. He seems to in the process of many dramas and appears to be very popular actor now.

Wu Gang plays Chen Ping Ping. We’ve only seen him in the film Super Me, he was vastly different in that movie. He played the part of creepy Chen Ping Ping very well.

Guo Qi Lin plays Fan Si Zhe. We felt he should have had a larger role in the show, one of our favourites and this is the case with fans. He’s character is the underdog and sweet.

Thomas Tong (Tong Meng Shi) plays Uncle Wu. An extremely popular actor with numerous projects in the pipeline. His character in this show was very mysterious and was always around to protect Fan Xian. His character was like Daredevil, not exactly blind but wore something round his eyes so he couldn’t see, not sure if he is blind.

There is one side of the story which is Fan Xian discovering his mother’s past and his venture into the world of politics. The other more scifi/fantasy part is something they never got into much. In what looks like the present a university student who looks like Fan Xian is drafting a story which is in fact what we see in Joy of Life. Then there are clips of dream sequences (?) when Fan Xian 1) sees himself in a modern hospital in a coma, 2) his real home is a huge city of the future covered in ice and 3) Fan Xian retains some knowledge of the future or a parallel universe. Hopefully, those will be explored in seasons 2 or 3.

The first episode was a little odd, I wondered if this was a comedy show, it was slightly annoying. Then it became more serious and complex with twists and turns. The main character just got too annoying at times, it felt he was indestructible and not learning anything along his journey, little character development. Uncle Wu and the brother Fan Si Zhe were our favourites and should have featured more in the show.

The special effects are becoming more sophisticated in Chinese drama shows and this series was no exception, really raising the bar. It seems the production company may have put in quite a bit of effort with the musical score, sometimes it was over-kill but appreciated that there wasn’t too much repetition. The closing title’s theme was fantastic, the best I’ve heard out of all the drama’s I’ve seen.

This drama is well worth the watch, ignore my negative criticisms as these are just my observations. I would give it a 8/10. Other reviewers have given it an average of 9/10 as I’ve seen on various Asian site.