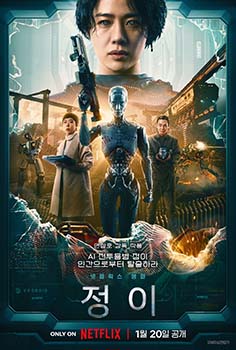 From IMDB:
Set in the 22nd century, climate change has caused the planet to become uninhabitable and humans live within a man-made shelter. A war takes place within the shelter. Jung Yi is the elite leader of the allied forces. She becomes the subject of a brain cloning experiment. The cloning experiment is a potential key to win the war.

Kang Soon Yeon (강수연) as Yoon Seo Hyun
Sadly she passed away from a cerebral haemorrhage on 7th May 2022, while the movie was in post-production, she was only 55 years old. She is a veteran award-winning actress with her first film being in 1977 and TV drama in 1979. The Korea Times has this interesting article.

Ryu Kyung Soo (류경수) as Kim Sang Hoon
He is best down for drama series such as Itaewon Class and Confession. Jung_E is not his only Netflix production, previously in the 2021 series Hellbound in the upcoming series Glitch.

The best thing about this film was the special effects. Very interesting landscapes and the robot scenes were faultless, including the fight scenes.

The film was let down by the script. They should have focused on improving that.

I take this as a more action movie than anything. So, don’t expect Shakespeare.

With the exception of Kong Soon Yeon the acting wasn’t that great either. The three elements of the film just didn’t come together ie CGI, story and acting.

Unfortunately, when we started watching the movie Netflix defaulted to the English dubbed version rather than the Korean voice and English subtitles. I never watch anything that is dubbed in English because the voices they use are patronizing. This was the case with this film, it was just dreadful, especially the voice of the character Kim Sang Hoon.  Later on, I did watch parts of the film that hadn’t been dubbed and it was much better.

I don’t want to rate this movie since it was all over the place, I suggest viewing it and deciding for yourself.

This film is only available on Netflix, it’s in their Top 10 in Canada.