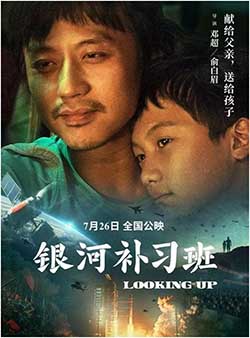 Looking Up (银河补习班) is a very under-rated and patriotic blockbusting Chinese film that was released on 18th July 2019.

Ma Fei is about to meet his death while orbiting the Earth, in space. He recalls his life, as a child, being raised by his father, which bought him to this point.

The film lasts for 147 minutes. It is an emotional roller-coaster with numerous motivational messages.

The cast was outstanding and delivered brilliant performances.

Deng Chao (邓超) as Ma Hao Wen
He was not only the main character, the Father, but he also co-Directed the film with Yu Baimei.  This wasn’t the first production that he had directed. I hadn’t seen him in any other productions, but he certainly is busy with a TV show and two films in the works.

Johnny Bai/Bai Yu (白宇) as Ma Fei (the adult)
Many people will be aware of popular actor and singer Bai Yu, he’s very much in demand. We are currently watching him in the Guardian TV series and was looking around to see what else he’d done. I noticed his unmistakable laugh in this film which I’m familiar with from Guardian also, like a snicker.

Li Jian Yi (李建義) as Director Yan (in charge of the school)
Another busy actor, in my age group. He was in Joy of Life which I had seen but don’t recall him in that.

Sun Xi Lun (孙浠伦) as Ma Fei (school age)
He was fourteen or less when making this movie and did a splendid job. I didn’t realise it while watching the movie, but he also appeared as ChengLing in Word of Honor.

Brilliant film. I am surprised to see hardly anyone else review it.

Angela Liu authored the story; I couldn’t find any information about her.  There were some twists and turns, questions that were left unanswered, and of course an emotional roller-coaster with highs and lows. There are humorous scenes in the movie too, and at first, I thought it was going to be a comedy but really wasn’t, another scene towards the end looked slightly out of place but still amusing none-the-less.

I will mark it down slightly for special effects. There is a scene where the father and son watch planes flying by, these are clearly CGI of some sort, and I would say could have been cleaner. Most of the special effects launching the spaceship and orbiting round the earth were very well done. However, the spaceship in orbit seemed too small to hold two humans.

I’m not one for motivational messaging in movies and there was some of that in the movie almost done in a typical Chinese patriotic manner. I was surprised about the messaging around the education system trying to rebel against structural norms “Life does not necessarily have an A, B, C or D answer but critical thinking allows us to expand our horizons more”.

Looking at the trailer I notice one scene was cut from the film. I wonder if there were any other cuts.

As I write this the film is on Viki and AsianCrush.