Love To The End Review 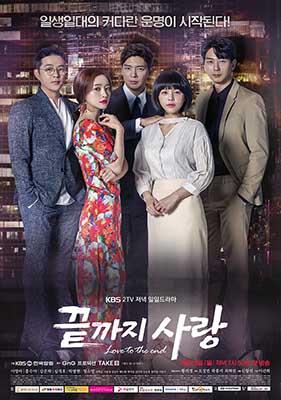 Love To The End (끝까지 사랑) was an extremely popular South Korean soap opera that ran between July and December 2018.

The story is about four main characters, as follows:

Han Ka Young
A bright and positive young lady whose parents divorced after the father became bankrupt. The father now owns another company and the mother running a small restaurant. She falls in love with Yoon Jung Han who works at a glass factory.

Yoon Jung Han
The successor to the family-owned glass factory. His father has some health issues, and the mother is a little hypersensitive.

Kang Hyun Ki
The successor of a large conglomerate company the owners of which are up to no good. He falls in love with Yoon Jung Han’s sister.

Lee Young Ah (이영아) as Han Ka Young
I hadn’t seen her in any other productions. She has won several awards. Gossip columnists suggested that she was dating Kang Eun Tak around the time of this production.

Kang Eun Tak (강은탁) as Yoon Jung Han
I saw him in A Man In A Veil recently, he has starred in many soap opera type series. He will be in a 50-part series starting 25th September 2021 called A Gentlemen and a Young Lady (신사와 아가씨), first venture out of soaps in a while.
Follow him on Instagram.

Hong Soo Ah (홍수아) as Kang Se Na
An actress I hadn’t seen in any other dramas. After Love To The End she also had a main role in soap Phoenix 2020, playing Lee Ji Eun. She recorded a Chinese series called Billion Dollar Heir but some experts are saying it won’t be aired, I guess we’ll see.

Shim Ji Ho (심지호) as Kang Hyun Ki
An actor whose career started in 1999 and has appeared in many regular TV drama’s as well as soap operas. I hadn’t seen him in anything else but he is very popular. He is starring in a new soap called National Wife starting in October 2021.
Follow him on YouTube, he’s a jolly fellow who is a bit of a foodie.

During the first 25% of this drama, I almost gave up on it. Everything seemed to revolve around the on/off romance between Han Ka Young and Yoon Jun Han. More off than on. However, after that was out of the way I would say the show was brilliant.

There were certain episodes that had a cliffhanger that had the viewers on edge. Episode 55 was one of them.

All the actors did a brilliant job on this show. For example, Hong Soo Ah didn’t look the part to play someone so evil but she really went to town with it. The most interesting relationship was between actor Im Jae Geun (Kang Se Na’s secretary) and Eun Hae Sung as James’s assistant K. As a side fact both Kang Eun Tak and Eun Hae Sung both speak English well.

So, this show was a welcome COVID distraction. Be patient some of the slower episodes because the drama will become more exciting. I will give it an 8.5/10.

Love To The End is available on the KBS YouTube Channel, in this playlist.