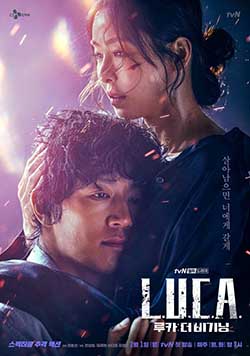 LUCA ran for 12 episodes of just over an hour each.

Ji Oh has superpowers but whenever he uses them most of his memories go away. He is chased by a mysterious sect who want to bring him home to perform further experiments in order to duplicate and clone his species.

A younger Ji Oh had spent a day in Gu Reum’s home but the day after her parents vanished. When Gu Reum grows up and becomes a detective she is determined to find out what happened to her family.

Even though the titles are familiar I’ve not seen any of the productions the actors have starred in.

Kim Rae Won (김래원) as Ji Oh
A popular actor mainly for TV rather than film work. He will be starring in a 2022 production called “The Police Station Next to Fire Station”.

Lee Da Hee (이다희) as Gu Reum
She is a model, singer, television and film actress. She is better known for her TV performances.

Other people who have reviewed this drama are more or less in agreement that after episode 8 the storyline became much worse.

A group of mad scientists made Ji Oh in a laboratory, it was linked to a religious sect that used the followers to carry the clone babies until birth. A government agency was also linked to the experiments. They wanted to create a race of superior beings with the most powerful parts from animals. With Ji Oh on the run they wanted him back, to obtain his embryos. The sect would go to any length to get him back.

There was a soap opera element to this drama going on in the background. Woman meets super being, falls in love, has his baby, and so on. Then there is the action side where Ji Oh was being chased all the time and only narrowly escaping each time. The action sequences were done well, very good special effects. There would be most likely too much violence for many people in this show. Probably the lack of action and more romance put some people off the drama, after episode 8.

The ending is another story, it was a little bizarre, but left the series on a cliffhanger about a possible return. I think I was hoping for a happy ending but giving the way the script was going it was most likely impossible. I think it’s best to put this drama to sleep at this point. I did enjoy it though.

I will rate it 7/10. That is about average compared to everyone else.

The drama is available on WeTV and Viki. I don’t know what’s on WeTV but Viki procured “behind the scenes” footage which is just as interesting to watch as the drama itself.