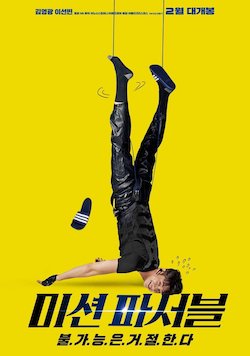 Mission Possible (미션 파서블) is a Korean film that was released on 17 February 2021. It is a spy orientated comedy-drama film.

Yoo Da Hee is a trainee with the Chinese Ministry of State Security, she is given a mission that could cost her life. Her job is to close the net on an arms smuggling ring. She needs to reach out and pair up with a Korean counterpart but there was a mix-up and is partnered with an inexperienced private detective, Woo Soon Han, who has cases for missing dogs.

There is a strong cast in this movie:

In the first few minutes I wondered what I was watching, it seemed serious and a bit difficult to follow. Then, a bit further on the comedy started to show and it got better. The best parts of the film were when the storyline moved at a high pace. Some of the gags were spaced out as such it took a while to get the gist of the joke, like a dry sense of humour. There were moments in the film when the storyline appeared to go too slow and I was getting a little bored, in other words, they should have kept a faster pace during the whole movie. There are a few surprises along the way and a complete about-face in one of the character’s storyline.

The movie felt like an introduction to a second one or maybe a TV series spin-off. We did enjoy it very much, it was like a cross between a comedy version of the US TV series Mission Impossible and Get Smart.

So, I would give the movie about a 7.5. It can be watched for rent on Viki.