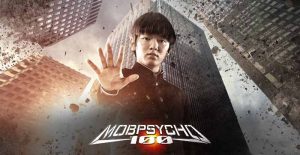 Mob Psycho 100 is a TV Tokyo and Netflix co-production from 2018 based on the Anime series of the same name.

The series is about a middle school boy named Kageyama Shigeo, nicknamed Mobu (or Mob), who is extremely shy and has very low self-esteem. Mob has extremely powerful psychic abilities which he doesn’t like to use due to hurting people with them in the past. He also thinks using these abilities will not win him a girlfriend. Mob isn’t the only person with these special abilities and he is manipulated by those who want to harness them for good and bad.

The main actor in this series is Hamada Tatsuomi who is known most recently for being Ultraman Geed and other Ultraman-related movies. He is absolutely perfect for this part as he comes across as very sweet and innocent, just like the actual character itself.

It was a pretty good show, I enjoyed it a lot.

I checked out a couple of episodes of the original anime before reviewing the show. The anime was fast and busy for me, whereas the live-action was slower.

The show might be more suitable to a younger audience but definitely over 18 since some of the content wasn’t children appropriate. The story was pretty much secure but very cartoonist. Some of the humour in the show was very unique, especially from the Arataka Reigen and Takane Tsubomi characters whose performances I enjoyed very much. The structure of the show was unique too, quite a different feel to it and very cute in parts, I love the closing theme and how they had different versions of it. I was quite impressed by the dramatic scenes and acting from Mochizuki Ayumu who played Mob’s brother Ritsu.

The special effects were of a much higher standard than I expected but some were a little old school compared to what we see in the US, Canada and UK. The physical effects, where people were thrown around the room crashing into furniture I thought was of a very high standard, they much have been very highly trained stunt people.

I would recommend this show.