Moonshine and Valentine (结爱·千岁大人的初恋), also known as “The Love Knot: His Excellency’s First Love”, is a Chinese TV serial that was broadcast in 2018, it had 25 episodes. 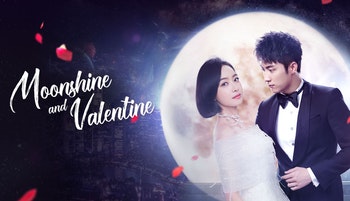 The only actor I knew from the series was Johnny Huang who I had previously seen in the low-budget but internationally popular show “Addicted Heroin”, which isn’t about drugs but a gay relationship.

Via Internet Movie Database:
Helan is a mythical nine-tailed fox who has lived for centuries, while Pipi is a seemingly normal human. It is revealed that in her past reincarnation, she was connected with him.

The storyline can be a little complex. 900 years ago a race of hybrid foxes escaped from their collapsing planet and made a home on Earth. Those aliens evolved on Earth taking human form and fitting into society although over the years became secretive about who they are. Many years ago one of the Fox Clan (Helan Xi) fell in love with a woman which never worked out but she was beset with a curse. So, Helan waited through the generations, he doesn’t age, for her resurrection who in this era is known as Guan Pipi, a journalist. In addition to this, the Foxes split up into South and North Clans for which there is friction between them both. In the show, there is some supernatural, superhero, and sci-fi element to the story but the relationship between Helan and Pipi is at the forefront.

The first noticeable thing about the show is its pace, some people online say it’s very slow but for me, this was something that drew me to it, it did have some pockets of action but not many. The storyline was pretty complex but they did well explaining things, maybe the series could have been longer to explore it a little more. There was one episode that completely went off script and away from the current timeline, at first, I was a little confused and wondered if I had missed an episode, but it actually turned out to be the best of the series, wait for episode 24. My two favourites on the show were actors Li Shen (Xiu Xian) and Leo Li (Kuan Yong) whose relationship was amusing and engaging, I’m pleased that the supporting cast had a lot of air time. Many people complained about the ending and although it’s not how I would have finished the show I’m not sure how they could have rewritten it, I doubt if there could have been a second season. The best part of the show was the opening title sequence which is a work of art, like a sophisticated comic.

The pace will annoy some but please others. I enjoyed it a lot so will give it a 4/5.