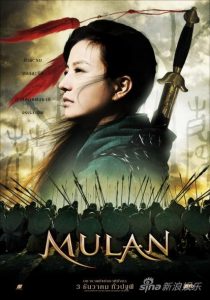 Disney has recently released its own version of a real-life Mulan film which has come under heavy criticism globally creating a Boycott Mulan movement.

There are various reasons why they are boycotting the movie, which I can’t be bothered to get into here, but as the film makes its way around the world the more calls there are for boycotting it. Chinese State Media slammed it and it hasn’t been too successful there. It’s about to be released in South Korea and there are calls to boycott it there.

I saw some discussion about a Mulan movie that was made in 2009 so we decided to check that out.

I guess everyone knows the story of Mulan, where Hua Mulan goes into the army to replace her ailing Father as a female disguised as a male, and rises up the ranks to become a commanding officer.

I recognised some of the cast instantly, most notably:

Review of the Film

The acting was really good, you just can’t go wrong with the cast they had chosen. I believe they made the film what it was.

I thought the film was very well done, it was darker and grittier than I had thought it would be. There was some violence which I didn’t enjoy but closed my eyes during those bits. There are usually many strong female characters in Chinese films but this was done particularly well when Mulan was trying to deal with the emotional impact of the horrors of war and the loss of her love interest (allegedly).

The cinematography was quite well done, especially in portraying the vast number of soldiers and the wide-open spaces.

I wasn’t too keen on the ending of this movie. I haven’t seen any other Mulan films and maybe this is what happens but had preferred something else.

So, I would rate this film a 4/5. I can’t compare it against the Disney version but at least this one not being made by Hollywood would portray Chinese culture in a much fairer way.