Nirvana in Fire is a brilliant Chinese TV series that has now aired 2 seasons with another season to come.

Nirvana in Fire 2: The Wind Blows in Chang Lin takes place 40 years after season one. There are 50 episodes that aired in 2018.

Rather than me figure out how to explain the plot this a better one:

Xiao Ping Zhang and Xiao Ping Jing are the talented sons of Xiao Ting Sheng, the Prince of Changlin and general of the Liang dynasty’s most powerful army. Ping Zhang is the eldest and heir of Changlin, while Ping Jing is carefree and receives teachings from the master of Langya Hall in the jianghu.

The Changlin Manor exists, first and foremost, for the people of Da Liang. They are greatly respected and trusted by the current and past emperor and they act with high integrity and loyalty to the country. However, there are those who worry that the Changlin Manor is gaining too much power and favour, and there are those with old grudges to repay. As such, shadowy plots battle once again with righteous conduct in this sequel, as familial ties, moral values, ambition, and coming of age themes take the protagonists through a tumultuous road to finding themselves. 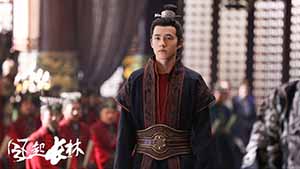 I had never heard any of the actors that appeared in season two but have since seen them in other productions. These are the main actors from my perspective:

Turbo Liu (刘昊然) playing Xiao Ping Jing.
The actor appears to be in demand for movies rather than TV shows now. We have seen him in 1 of the 3 Chinatown Detective movies. He did look a little out of place in this show as they made him look quite pretty.

Wu Hao Chen (吴昊宸) playing Xiao Yuan Qi
Like Turbo they made this character slightly pretty and I didn’t expect his character to turn in the direction that it did. He has two upcoming TV series.

I thought season 2 was better than season 1, this was down to two reasons. Firstly, there were various story arcs throughout the series which made it more watchable for me. Also, there was more action, some of it leaning toward wuxia.

The acting was pretty good from most of the actors. None of them was too over the top and played their parts consistently.

There were horse-riding episodes that you could tell were filmed on a green screen and they were quite funny, even though they were meant to be serious to ultra-romantic. The other special effects/CGI, for the fighting sequences, was executed very well.

The opening theme song was a variation on the first. There were two closing themes, they changed halfway through the series, the second version was much better.

I don’t think it’s rewatchable simply because it’s way too long, but I might go back to specific episodes. I will use it as a reference should season 3 come to fruition.

I would highly recommend both season 1 and season 2 of Nirvana in Fire. I rate it 9/10.

The series is available on various platforms but the best version is on YouTube simply because the English subtitles are so easy to read.