Nirvana in Fire Season One Review 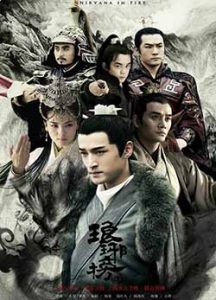 Nirvana in Fire is a TV series from China’s BTV (Beijing Satellite TV network). This is my review.

I will provide a very basic description so I don’t give away the plot too much.

Lin Shu has a secret plan to covertly assist Prince Jing, an unfavoured son of the Emperor, to rid the court of all the scheming officials and help him rise to power.

The show is 54 episodes long and was broadcast every day, Monday through Sunday, from 19 September to 15 October 2015.

These are the actors I think are most prominent in the storyline or are my favourite characters.

Hu Ge (胡歌)
Plays the character. Mei Chang Su / Su Zhe / Lin Shu
This prominent actor did a very good job in setting a great tone for the character and series, I couldn’t have imagined anybody else in this role.

Wang Kai (王凯)
Plays Xiao Jing Yan / Prince Jing
Again, another well-placed actor, very much in demand with 5 different upcoming series for him. I would have like the character to smile a bit more.

Leo Wu (吴磊)
Plays Fei Liu
I have to say this was my favourite character in the show, definitely added some comic relief. Leo Wu is known as the “Nation’s Little Brother” and is a child actor born in 1999 with some upcoming productions.

Ding Yong Dai (丁勇岱)
Plays Emperor Xiao Xuan of Liang
This actor seems awfully familiar but hasn’t seen him in any other of his productions. His best acting performances were at the end of the series. He has had a long career in many series.

Liu Min Tao (刘敏涛)
Plays Consort Jing
Even though only listed as a support role I think she should have been listed as one of the main characters. We saw the actress in The Rise of Phoenixes on Hunan TV and on Netflix, she was very good in that too. She appears to have 8 series currently in production, I don’t know how she copes with that much work.

This series was rated very highly in the Chinese groups I belong to and I would concur with their comments.

This series is not focused on action or Wuxia even though there are elements of that within it. It is a more strategic orientated series about manipulating people to go down a certain path to reach an end goal, the person doing the manipulating is of course the main character Su Zhe while he tries to hide his secret and keep going despite his failing health.

There are some action-orientated scenes in the first episode which is repeated often during the series, I didn’t think the special effects on that was very good. However, there is one whole episode, later on, a big battle, which was extremely well done.

The story, from a book by Hai Yan, is quite brilliant, very well planned and executed on screen. This is what the series will be remembered for the most, not necessarily the costumes or set, which were still very nice.

They may have been able to reduce the number of episodes as some were a little slow and I found it difficult to keep awake during them. I think they were probably trying to set a tone but they need to keep the audience going.

I would highly recommend the series and would give it a 4.5/5. It is currently available on YouTube and various other websites for free. As I write this we have started watching season 2, and there will be a season 3 at some point too.