Not Quite Dead Yet Movie Review

Not Quite Dead Yet 一度死んでみた is a Japanese comedy thriller movie released in March 2020. 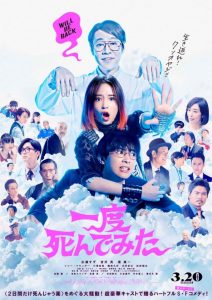 Nanase Nobata is a university student who has a very bad relationship with her father, he works for a pharmaceutical company who invented a pill that emulates death for 2 days. He took the pill but his daughter then has to find out who is trying to steal company secrets to give them to a rival.

The film was notable for its number of cameo appearances although, I shamefully admit, I didn’t know any of them. The main case was:

As always Internet Movie Database didn’t review this film too kindly but it went down well with Asian netizens, one review said it was hilarious and inspirational. In the end, the movie did come with a moral message to tell in a quick hit kind of way.

The first few minutes of the film I thought…what on earth have I just started watching?! After that initial hurdle, I started to enjoy it. It was a very funny tongue in cheek humour about death and funerals, I never knew such humour would be acceptable in Japan.

The acting was very good, kept in line with the completely bonkers style of the movie. The straight-laced father actually fit in well with the more over the top characters of the film.

The movie was well worth a watch. Be patient with the first few minutes and don’t forget to watch the clip at the end of the closing credits.