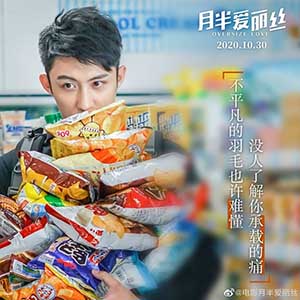 Oversize Love (月半爱丽丝) is a Chinese movie that was released in October 2020.

Lin Xiao Xi is overcome with emotion as she falls for not so decent celebrity Huang Ke and as a result is determined to lose weight but fails miserably. Then a rabbit comes along taking her to a magical house to temporarily transform her into a slim beauty but there are negatives surrounding the potion she takes.

Johnny Huang (黄景瑜) as Han Bing
The first show we saw Johnny in was Addicted which didn’t pass the censors in China but was a success globally. We’ve seen him in many other projects such as Moonshine and Valentine. He is a very popular actor and model.

Gabrielle Guan (关晓彤) as Lin Xiao Xi
Another extremely popular actress but we haven’t seen her in any other productions as far as I can recall. She has remained constantly busy since the mid-2000’s.

I will say from the start that this was a terrible movie with its only redeeming feature were the actor’s performance.

The storyline showed some promise. I was expecting another fat shaming movie but turned out to be the opposite thankfully with a good message at the end. The female lead didn’t seem very overweight, and her face was a little out of proportion with the rest of the body, so they could have done better in this regard.

There was some original humour in the movie. There was a link to Alice in Wonderland, the 1865 English children’s tale by Lewis Carroll.

There may have been a small hint that the celebrity was bisexual, but I could have read something else into it.

The special effects were decent as they digitally manipulated Gabrielle’s weight, the bunny and magic house were quite well done too. There were often other digital effects through the movie which were annoying, like a children’s TV show. The production company was trying to make the film close to a Disney feature.

There were gaps in continuity during the movie, some points were stuck in suspended animation.

I’ve seen scores in the region of 7.0/10 online, but people were being too generous. I would mark it much less; I’m conflicted in giving it a score, so I won’t. Is it worth seeing? If you are a fan of Johnny Huang or any of the actors, it might be worth checking off, otherwise I would give it a miss.

Right now, it’s listed as being on Viki and Amazon Prime Video. It’s not on Prime Canada.