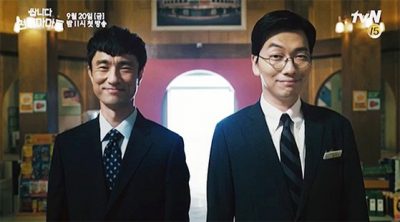 Pegasus Market is a South Korean TV show made by tvN which aired between 20 Sep thru 6 Dec 2019. Excluding the advertising breaks the length of each episode was about 1 hour 5 minutes.

A shabby supermarket where employees normally go to if they have misbehaved and as seen as their next step to being fired. The manager, Moon Suk Goo, continues to make the store a success but a new Director arrives, demoted from headquarters, intend on destroying it along with the whole corporation.  Luckily, the Director continues to experience failures where each opportunity to destroy the place ends up in being a huge success. To try and make matters worse the Director hires many misfits who turn out to be really appreciative of the job and throw themselves into their career to ensure success for the company.

What an amazing cast, I had never heard of these actors before but each of them was so perfect for the role especially the Director and Manager.

Kim Byung Chul played Jung Bok Dong, the Director. He is a character actor with a long successful career and amazingly talented. His character went from serious to hilarious to dancing the next, I can’t imagine anyone else who could handle this role. I must find out what other shows he is in.

Lee Dong Hwi plays Moon Suk Goo, the long-suffering Manager. Also, a very good performance calling for a variety of skills. Towards the second half of the season there is a twist in the story for Mr Moon calling for a very emotional performance and this was one of the most memorable of any South Korean drama’s I have seen.

All the cast were brilliant.

Anything can happen in Pegasus Market, and it did, each episode continued to entertain from start to finish. I was so looking forward to seeing this show and it felt it was made especially for my taste.

It had a good consistent story line throughout the series keeping the viewers hooked on what might happen next. Each character was lovable in the own way, there wasn’t anyone I really disliked, even those playing the evil people. From the drama one minute, to humour the next, and then to a scene where you would need several boxes of tissues to get through it.

I would absolutely recommend this show, it’s in my top South Korean drama’s list along with Rooftop Prince and Circle.