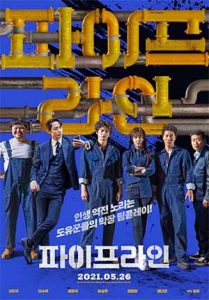 For Asian movie night this week we saw Pipeline (파이프라인), a Korean movie released in May 2021 and available to view on Viki.

To make himself rich and pay back loan sharks Hwang Gun Woo hires a team of misfit “experts” to siphon oil from the national grid into his own storage facilities. Things go sour when he threatens the teams’ lives for not meeting his deadline and spying on them.

Seo In Guk as Kan Se Doi (aka Drill-Bit). He is the leader of the team, also known as Captain. I haven’t seen this actor in other products, but he is popular starting his career as a pop singer. He is known to have some health issues along the way including bulimia, he was told to lose weight, and Osteochondritis dissecans, a bone and cartilage condition, which made him exempt from military service.

Leo Soo Hyuk as Hwang Gun Woo, the bad guy. As well as an actor he is also a model. I haven’t seen him in any other productions.

Jung Jae Kwang as Sang Goo. He played a support role, police officer, in this movie but I mention him since we saw him in It’s OK Not To Be OK, he played patient Joo Jung Tae.

I thought this was a surprisingly good movie, better than I had envisaged. I did think beforehand why they would make a pipeline seem exciting, they should have named it something else, either way it was worth the watch.

I thought the actors and storywriters did an excellent job of the cast interactions, some of its drama, and some of it very humorous. I’m sure the story was a bit farfetched and headed into an odder direction with the bad guy’s goals being that of a mad scientist towards the final 30 minutes of the movie. It was a shame they knocked off one of the team, but I guess that’s what made the bad guy so evil.

It had some special effects. The oil running through the pipes wasn’t well done. The pipeline exploding in the hills of Korea was well done.

Many of those reviewing the movie clearly watched the movie because of Seo In Guk, one said “I wouldn’t be bored with him reading the entire phone directory”.

I would give this a 7/10. Much better than anticipated, worth a watch.