Prince William (or 威廉王子 / Wei Lian Wang Zi) is a television show from Taiwan that was broadcast from 25th April to July 25th 2014. Each episode is around 1 hour and 15 minutes without the commercials.

Liu Wen Bin is a fishmonger who lives and works in a small village, he is very content with his life.

Both Liu Wen Bin and Yi Wi Lian look identical but unrelated. Yi Wi Lian’s company executives get Liu Wen Bin to stand in for him but can he convince other people in the company and William’s sister?

Ken Hsieh (坤達) play both Liu Wen Bin and Yi Wi Lian
Ken was in the popular Taiwanese rock bank “Energy”, when the band folded he moved into acting and has been in popular dramas such as Absolute Boyfriend and Love Cheque Charge. He has been in many other popular TV shows.
Instagram

Antonio Huang (黃宥傑) did the title and end theme of the show, they are excellent and can be found on YouTube. Antonio’s Weibo Profile. 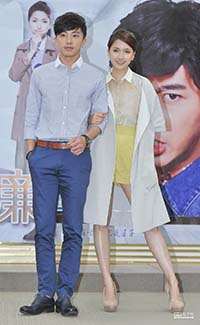 This obviously isn’t about THE Prince William of the UK.

I actually saw this show quite a few years ago and have recently gone through some of the episodes again.

It’s a very light comedy drama in a style that maybe only Taiwan can produce.

Ken Hsieh does an extremely good job at playing both characters, one miserable and vindictive, and the other happy go lucky. There must have been a lot of work behind playing both the characters on screen at the same time and some good special effects. There were some minor mistakes, mainly in the make up department, but they didn’t really matter to me.

The story development was good, this wasn’t just about the Yi Wi Lian trying to be Liu Wen Bin but it developed when his home village is under threat of being redeveloped.

I recommend this show if you want something easy going to watch. It hasn’t “dated” over the years. The ratings were so-so online but I thoroughly enjoyed it and will give it a 4.5/5.

The show is available on Netflix in certain countries, not in Canada. I’m not sure which countries have the right to see it. You might be able to find episodes on YouTube but they are broken down into 46-48 minute episodes rather than its original 1 hour 15 minutes.