In this article, I am going to talk a bit about my long relationship with radio and why it is much more important to me than any other medium.

The first time I had an interest in radio was during my stay at the Royal National Orthopedic Hospital in Stanmore, United Kingdom.  It was a long-stay hospital so one of the challenges was to amuse the patients going through long-term and often traumatic health experiences.  There were a lot of fun things to do there thanks to the awesome staff but I remember distinctly the hospital’s radio station Radio Brockley. Quite a few of us on the ward would tune into it and enjoy it throughout the day.  The station has been going on for quite some time and is award-winning too.

Hospital Radio back in the 70s, I am sure it’s the same now, was a great opportunity for those who wanted to get into the industry to gain experience, whether that be at the microphone, part of the engineering team or other administrative duties.  Another route to gain radio experience these days is through community radio stations.

From that time I got into other aspects of radio including owning a CB Radio talking to lorry drivers who would be passing on the M25.  Certainly back then CB was so much more popular and being near the motorway certainly helped.

Then I got into DX, which is listening to shortwave radio stations from around the world. Back then there was no such thing as internet streaming and stations invested more in shortwave.  The first radio I have was a Grundig Satelit 3400, oh and I absolutely adored it.  I was constantly being entertained by all sorts of broadcasts from around the world which was far more interesting than any local stations. 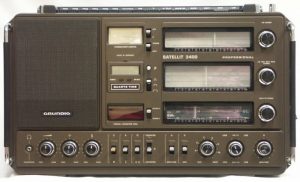 For a few years, I was involved with the British DX Club.  I put together the publication and did some other duties.  Of course, it was a social club and great to meet new people.  Many of those who were involved in the club back then are still there today.  It is absolutely worth joining if DX’ing is your thing and people there are extremely knowledgeable.

One of the first jobs in my career was working for the Central Office of Information.  This was a quango of the British Government but acted as the PR agency for many departments.  I was in the Radio department which produced public service messages in its studio on Hercules Road, South East London almost opposite Lambeth North Tube Station. It was great to learn about the radio commercial production process, scheduling, royalties, paying celebrities and so on.  Then to hear those messages on the radio was cool and rewarding from the perspective of doing some public good, its not as though the adverts were selling something people didn’t want.

So as the years go by radio hasn’t changed much despite warnings that the tv could kill it.  In fact, that is further from the truth.  I have seen even more interest in radio as the years have gone by now that they can be streamed online.  There is no such thing as local radio any more as you can pick up so many stations through services like TuneIn.  We also have satellite radio streamed into cars and can be heard online too giving the consumer more choices in many types of music or conversations.  DAB is very popular in the UK with almost 50% of radio consumers listening through that method.  There are wifi internet devices that are designed for picking up radio stations only, although I believe the technology isn’t that great as yet.