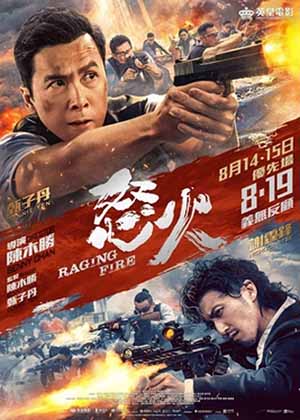 Raging Fire (怒火·重案) is a movie from Hong Kong that was released in July 2021.

Several years ago a police officer and some of his colleagues were sent to prison. While in prison they become bitter and resentful. Upon their release, they set out to destroy anyone who has upset them in the past.

Nicholas Tse (謝霆鋒)
A Hong Kong singer who has a lengthy TV and movie career.

Benny Chan (陈木胜)
He was the screenwriter and director of the film. He passed away in 2020. At the end of the film, there was a tribute to him.

Actually, I didn’t really enjoy this film very much. I was too violent for me and there wasn’t a single character that I could warm up to. The movie started, they blew stuff up, the movie ended. So, I would say, if you enjoy lots of action then this is the movie for you.

I can appreciate there was a lot of work that went into the film, especially the special effects and set up the stunt scenes.

This was the first Hong Kong production I have seen that was made post-National Security Law came into effect. I noticed there were some Chinese based production companies involved in the production, like Tencent.

The movie is available on BluRay via sites like YesAsia.