King Is Not Easy 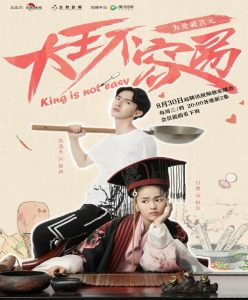 The show is about a lady, Da Xi, who runs a popular food stand who falls in love with Shao Yong, a Royal Guard. In order to be closer to him, she becomes a maid at the Palace. Through some other uncontrollable events her soul is switched with Ji Man, the Emperor, which is when the hilarity begins.

The show had 20 episodes and was broadcast Wednesday through Saturday between 30 August to 28 September 2017 in China.

Chinese humour isn’t that much different than the British variety and this show also tends to be quite slapstick.  I would say this is one of those shows that is quite a gay-friendly as we are seeing a lot of on Chinese TV right now.  Da Xi, whose soul is inside the Kings, is besotted with Shao Yong, so you see some touchy-feely encounters between the two.  In one of the episodes there is a discussion which goes along the lines of “there is nothing wrong with two men being together”, this I believe is the general Chinese view of homosexuality but the conflict is they are encouraged to have a more traditional family.

So 75% of the show is focused on the body switch situation but towards the end, it goes into another interesting direction to wrap the story up.  I won’t give anything away here.

I am also surprised by the extravagance of Chinese drama’s, for a 20 episode drama they seemed to have spent quite a bit of money on it, for example, the scale of the palace, interior palace sets, costumes and special effects.

It was an amusing series, a little camp at times, and very well done for how short it was. I will give it a 4/5.