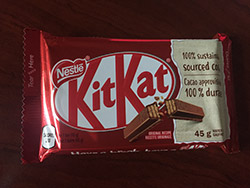 I’m not too bothered with the KitKat chocolate bar, it’s not something I eat on a regular basis but thought I would review the Canadian version of the product since it was on sale.

Each country appears to have its own quality of chocolate they use in their recipes and Canada is no exception. Whenever I used to visit Paris or Brussels friends used to ask me to buy KitKat there as the quality of chocolate appeared to be better than the UK.   So, how does the Canadian version pair up to its European counterpart?

It was just….ok, but not something I would buy on a regular basis.  I would save up my money and buy chocolate from independent stores or small businesses.

The KitKat website displays a range of products that I have never seen before, at least they aren’t available at any of the locations I shop at.  I often see a couple of different varieties in Asian supermarkets not available from Canadian retailers.  Some of the products listed on the KitKat Canada website link to Amazon, London Drugs etc but some I have no idea where you would purchase. Maybe they want to devoted fan to go out there and hunt for them but don’t have the energy for that.