For the past 26 weeks, we’ve been watching the TV series Salvation on Netflix, actually, I quite enjoyed it.

A rich technology genius, Darius Tanz, joined forces with an MIT graduate, Liam Cole, to try and stop an asteroid that is due to hit the Earth in 60 days time. The intense story line is interspersed with relationships between the central characters. 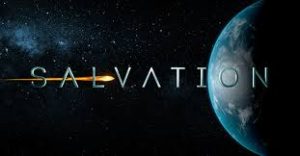 The series ran between 2017 to 2018 over 2 seasons and 26 episodes.  The first season was made in Toronto and the second season in Vancouver.  The series was commissioned by CBS but they cancelled it in November 2018.

The series had a mix of Canadian and British actors in the series with the odd American thrown in. The main cast over the two seasons were:

The second season was better than the first mainly because it was fast-moving and action-packed from each episode to the next.  They had obviously put a lot of effort into the series with regard to sets, some special effects and a challenging storyline thrown in.

I wouldn’t have classed it as 100% science fiction as it had a general drama, espionage, strange cult and soap opera quality to it as well. There were technology and some special effects on the show but it was more in the background.

Some of the soap opera type content seemed a bit much, who is having an affair with who, whose baby is it, broken relationships that get back together then break up again.

I thought Santiago Cabrera was much better in this series than he is in Star Trek Picard, I guess he is the lead actor in Salvation as he should be at this stage in his career. The only other actor I knew was Ian Anthony Dale who played Adam Noshimuri in Hawaii Five-0 – he was also better in Salvation although both his characters had a certain borderline evil trait about them.

All in all they did a grand job with the series and I would definitely recommend it.