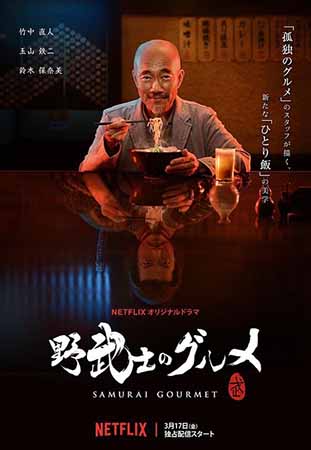 Samurai Gourmet (aka Mangaban Nobushi no Gurume/漫画版 野武士のグルメ) is a Japanese TV series commissioned by Netflix airing first in March 2017.

Kasumi Takeshi is a retired salaryman getting used to the routine of his second life. He has never had a beer at lunchtime during the week. He is trying to get acquainted with going out and eating alone.

The series is an adaptation of the very popular The Solitary Gourmet TV show. It’s also had a Chinese remake.

Takenaka Naoto (竹中直人) as Kasumi Takeshi
He is an actor, comedian, singer and director. He has been in many TV shows and directed about 6 movies. I don’t recall seeing him in any other productions.

Amayama Tetsuji (玉山鉄二) as Samurai
He is a model turned actor and has appeared in many TV shows, films and music videos. He is in Naked Director which is showing on Netflix as is Samurai Gourmet.

There are 12 episodes in the series of about 20 minutes in duration which makes it very watchable.

This is a very delightful relaxed TV series with nothing offensive or stressful going on in it. I would say it’s one of the best I’ve seen in 2021. Every person in the same age group can relate to this drama.

The stories are very simple, nothing complex, although drawing the views in to see where he is going to end up next. The main character gets excited by the simplest of food. It makes you think about the effort that goes into small business restaurants to bring their lovely creations to us.

This is only available on Netflix.