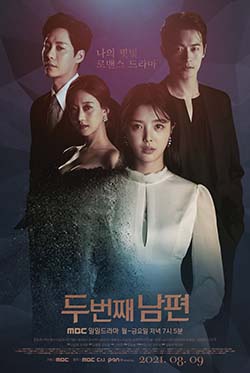 This is my “Second Husband” TV Show Review.

The story revolves around Bong Seon Hwa. Going through a tough childhood she was bought up by her grandmother. She fell in love with Moon Sang Hyeok and was in a common-law relationship with him. They had a baby together. He had an affair and then married the evil Yoon Jae Kyeong who started to murder people and become involved in multiple scandals.

There are too many cast members to mention here but I will list the top ones from my perspective.

Uhm Hyun Kyung (엄현경)
Popular actress with a good track record of shows she has appeared on. The last time I saw her was on A Man in a Veil, now she has jumped ship from KBS to MBC to be the lead actress in Second Husband. She won an MBC award for her performance in this show.
Instagram

Cha Seo Won (차서원)
A young actor from Busan appeared in numerous shows before but Second Husband is the first I have seen him in. He plays the new love interest for Seon Hwa, I understood he is dating Uhm Hyun Kyung – but just a rumour. He won an MBC award for his performance in this show.
Instagram
“Study with me” YouTube video

Oh Seung Ah (오승아)
Talented singer and actress, she plays the evil Jae Kyeong. I understand she is the main vocalist for a group called Rainbow. She has appeared in other soap-style dramas before, this is not the first time she has played an evil character.
Instagram
On “King of Masked Singer” YouTube video

Han Ki Woong (한기웅)
He has appeared in numerous TV dramas but this appears to be one of his first as the main character. He plays a more “little boy lost” character who is misled but certain people especially when there is money involved. I have seen him before in “Love to the End”. He played his part well here, a slightly downcast character even though in real life he seems very jolly.
Instagram

Ji Soo Won (지수원)
She delivered a great performance as the wife who has been trying to get revenge for 30 years, she is very popular with a long list of roles. I have not seen her in other shows.
Instagram

Kim Hee Jung (김희정)
I can’t believe how busy this actress is. I saw her play an evil character in A Man in a Veil.  She then performed in 6 other shows before going on to Second Husband. Then, is now in two other shows. I thought her role in Second Husband was a bit subdued and the character could have developed more, however, I think that was down to the director, producers and writers.  She is now in KBS soap Bravo, My Life.

Great performances by all the actors, it’s not easy being on a daily show.

The show was originally contracted for 120 episodes but since it was so popular it was extended by 30 to 150. Actually, there was a 151st episode which was just a “best moments of the show”. The show was broadcast on MBC, Monday to Friday, from 19:15 to 19:50.

It had all the elements of a typical Korean daily drama. Crazy mothers. People are supposedly dead but returning again. Revenge. Evil rich people. A gap in time between the storyline, for example – Love To The End had 6 years, A Man in a Veil had 5 years, and Second Husband had about 4 years. Cute child. Lots of Soju was consumed. Quite a few product placements, first a health supplement up to episode 120 and then a food delivery service for the rest. Pretending to be someone else. Memory loss after an accident.

The show had dramatic incidental music without words, on the whole. They had slightly different versions of that music, probably about 5 I think I counted. The album from the show was released on 16 April 2022, singles have released dates prior to that. I did note that the show and album included Trot music!
More music info here

The story kept going despite the longevity of the show, additional stories were included when it was extended. Some reviewers I noticed was complaining about the additions which made the story slow. I thought it was ok though. There were a couple of hints in the early episodes about a couple of the characters but one of them at least was done purposely to mislead or surprise the audience later.

My only criticism was the character of Seo Jun. I’m not sure if it was the actor not just getting into the role or the writers just didn’t explore his background. He seemed to be at home when he was part of the action but otherwise, the lines he was given weren’t that great.

I will give this a 5 out of 5, top marks. I thought this was better than A Man in a Veil. So far, this is my favourite daily melodrama.

This can be seen on Viki.