Since the majority of my work in centered around WordPress I was very interested in seeing developments around the State Department’s website, some of the issues below have now been fixed, or in the process of being fixed….slowly.

News started to come in about an odd change to Donald Trump’s biography on the State Department website. As far as I can tell Christopher Miller, who is a journalist with BuzzFeedNews, reported this first over Twitter:

Hey, @StateDept, what do you know that the rest of us don’t?

News of this spread quickly and over international media channels. It was reported that a disgruntled employee was to blame. It was yet another reason to laugh at the Trump administration.

I went to the website, like many others, and confirmed that the Trump biography page had been edited to say his term finished on the 11th January 2020. However, the time display that the term ended kept changing, so I am guessing the whole date was a field that updated itself, maybe a javascript code. 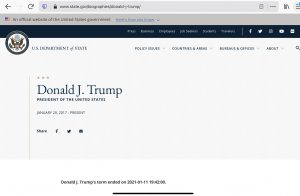 The State Department then created, what looked like, a temporary 404 Page Not Found page as follows (maybe putting a 301 redirect from the Trump bio to this page):

Now, this was implemented pretty badly, because:

I am thinking they implemented this without thinking through the ramifications. Did someone with bad skills in WordPress have to deal with this?

Will they reinstate the Trump biography?  Who knows.

If you go to the URL state.gov/kittens you can see it does indeed go to a regular 404 error.

When a visitor searched on Donald J Trump the results page still showed that his term as ended, as follows:

This has been fixed and no longer showing in the results, as far as I can see.

All search fields had an auto-fill on them with some embarrassing results.

This one was fairly “tame”:

However, this one is particularly offensive:

This appears to have been fixed. However, the damage was done as many netizens had already discovered the above.

As I said, I am quite surprised it took so long to fix the above with them not even bothering to reinstate the Donald Trump biography. Maybe they plan to later on. Maybe it’s not worth it since they will be placing Biden’s bio up there soon. I’m not even sure what the value add is, why repeat what is already on the White House website. Like the UK the US government should consider having a more joined-up approach for its web assets. I wonder if they have devolved web editing and an approval process for publishing? We’ll probably never know.

Either way, this was an interesting, if not amusing, little episode.